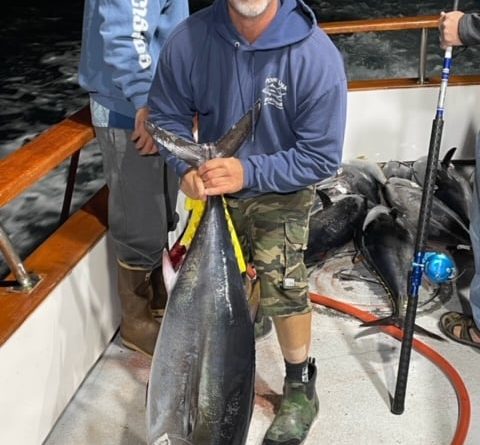 Limits of Bluefin for 18 anglers on a recent Legend 1.5-day trip out of H&M Landing. H&M Landing Facebook photo

SAN DIEGO— Southern California offshore anglers have been enjoying a fine spring fishing season to date, and what was already good fishing has continued to improve as we approach the middle part of May with a mix of bluefin tuna, yellowtail, and large bonito biting in offshore waters.

Catches of bluefin tuna continue to grab the spotlight with the late winter and early spring season producing bluefin catches that have gone up into the 200-plus pound class, current fishing producing bluefin that have been for the most part ranging from 20 to 120-plus pounds. Most of the yellowtail found around offshore kelp paddies have been in the 6-to-15-pound range and most of the bonito being caught offshore have been in the 8-to-12-pound range.

The current areas producing good fishing for bluefin tuna, yellowtail, and bonito have been the area to the east of the 267 Spot that is located easterly of the Tanner Bank, the western wing of the Butterfly Bank, the San Clemente Basin Weather Buoy, the San Salvador Knoll, the 230 Spot, the deep water outside of the 224 Spot, and the deepwater about halfway between the backside of South Island and the 302 Spot.  This has boat fishing areas that are spread from 18 to 70 miles 215 to 250 degrees from Point Loma.

Bluefin are being located by finding sonar marks, meter marks, spots of breezing fish, spots of breaking fish, and spots of working birds. Once bluefin are located they have been biting well on Flat Fall jigs, Colt Snipers, fly lined sardines, and sardines fished with a 4-ounce torpedo sinker.

The fishing around Los Coronado Islands has not been sampled much lately with most Skippers choosing to fish for the bluefin tuna, yellowtail, and bonito in local offshore waters. The most recent reports about the fishing at Los Coronado Islands are that the surface fishing has been slow and that there has been good fishing for bottom fish species such as reds, whitefish, and rockfish to go with an occasional lingcod.

The fishing along the San Diego County coast has been good for a mix of rockfish, reds, whitefish, sculpin, sand bass, calico bass, and an occasional bonus lingcod, yellowtail or halibut.

The best area for a chance at a yellowtail along the San Diego County coast has been fishing off the upper end of La Jolla. There have been occasional showings of yellowtail in the area and if you are fortunate enough to be at the right spot at the right time when some yellows decide to show, there has been a chance at hooking a 15-to-20-pound class yellowtail. Surface iron, yo-yo iron, and slow trolled mackerel have been good choices to try for the occasional yellowtail hookup that has been coming from the upper end of La Jolla.

Calico bass fishing has been improving at the coastal kelp bed areas with the kelp at the upper end of La Jolla, the Jetty Kelp outside of Mission Bay, and the kelp outside of the Roundhouse at Sunset Cliffs being the most productive areas for the calicos. When available, live anchovies have been the best bait for the calicos.  When I spoke with Ollie at H&M Landing earlier today, he reported that Premier had a good morning of bass and rockfish fishing on their morning half-day trip on Mother’s Day morning with 22 anglers catching 83 rockfish, 6 sculpin, 17 calico bass, and 6 sand bass.  Today’s afternoon half-day trip on New Seaforth out of Seaforth Sportfishing had one of the best calico bass bites of the spring season and they had a catch of 29 anglers catching 77 calico bass and 1 sheepshead.

Productive hard bottom and structure areas for the reds, rockfish, whitefish, and lingcod are the Imperial Beach Pipeline, the International Reef, the Whistler Buoy and the Dropoff outside of Point Loma, the Point Loma Pipeline, the Green Tank at Point Loma, “The 270” out to the west of Mission Bay, the upper end of La Jolla, the ridge outside of Del Mar and at hard bottom areas off South Carlsbad, Leucadia and Box Canyon.

The halibut fishing remains scratchy with an occasional halibut being reported.  Sandy bottom areas next to structure or next to hard bottom have been producing a halibut now and then and some of the better areas have been outside of the Imperial Beach Pier, the Yukon Shipwreck off Mission Beach, the sunken NEL Tower off Mission Beach, outside of South Ponto Beach, the Buccaneer Pipeline and the artificial reefs off Oceanside.

The spring surface fishing continues to be led by the good fishing for bluefin tuna, yellowtail, and bonito in offshore waters. The yellowtail fishing has been lagging behind at the Coronado Islands and along the coast but there is still plenty of good fun fishing to be found for calico bass, sand bass, reds, rockfish, sculpin, and whitefish. Keep on fishing and I hope to see you out on the water sometime soon!