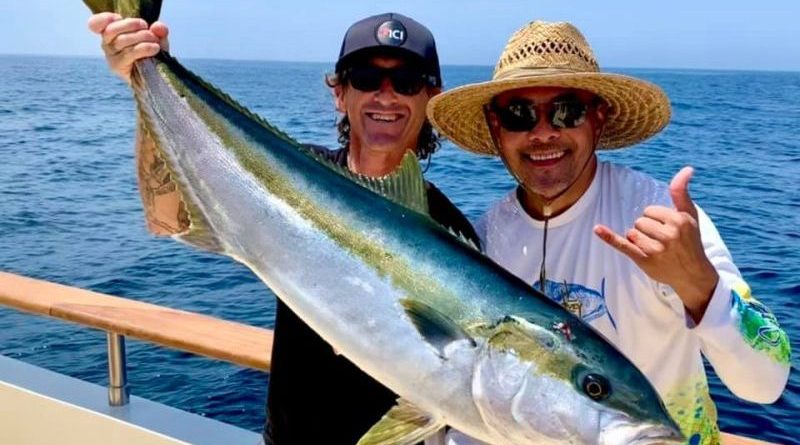 Southern California anglers have a lot to choose from in targeting species on the offshore fishing grounds and deciding what species you want to target will likely dictate where you choose to go fishing. If you choose to target bluefin tuna, your likely destination will be at an offshore bank in U.S. waters between the 9 Mile Bank and the Catalina area. Offshore banks in this sector are mostly holding big numbers of bluefin tuna and that might also produce yellowtail, dorado, or yellowfin tuna.

Your other choice for a day of offshore fishing is to head into Mexican waters and fish offshore banks between the Ensenada and Punta Colnett regions.  If you head down this way, you are heading into a prime kelp paddy yellowtail fishing zone that might also produce a few dorado, yellowfin tuna, or bluefin tuna. Last week you could get into the good yellowtail fishing at some of the local offshore banks outside of Los Coronado Islands but at the time of this writing, boats are having to travel further down the line to fish the waters outside of Ensenada and below to get into the good yellowtail fishing.

The yellowtail under the kelp paddies has included fish up to 30 pounds with most of the yellowtail falling within the 14 to 20-pound range. A recent catch included large yellowtail posted by Condor out of Fisherman’s Landing that had 37 anglers on a 1.5-day trip catch 1 dorado and 185 yellowtail that went up to 30 pounds. Productive yellowtail areas have been in the zone ranging from 5 to 10 miles southwest of the Banda Bank on down to where you are fishing to the southwest of the Peanut Bank. This has you fishing from 60 to 90 miles 155 to 160 degrees from Point Loma.

Bluefin tuna have ranged in size from 15 to 270-plus pounds with most falling within the 30 to 140-pound range. Much of the bluefin action originates from stopping alongside spots of breaking fish and trying to cast poppers, Colt Snipers, or surface iron to the breaking fish before they sound. There has also been some action that originates from stopping on sonar marks or meter marks.  When fishing fish found with the electronics there have been some bluefin biting on sardines and mackerel while slow trolling, flylining, or fishing with rubber band rigged sinker rigs. There have also been bluefin biting while drifting over marks and using kite-fished frozen flying fish, kite-fished live sardines, kite-fished live mackerel, knife jigs, or Flat Fall jigs. There are occasional bluefin caught on the troll while using kite trolled Yummy Flyers, trolled cedar plugs, and trolled spreader bar rigs. There are some bluefin biting during non-daylight hours and Flat Fall jigs and knife jigs have been working best when dropped down to marks found in the dark.

As talked about in the paragraph above, the bluefin are widespread and you never know when and where you might encounter an area of bluefin. A prime example was a recent day of fishing that saw the bluefin appear out of nowhere in the Carlsbad and Oceanside area. Captain Joe Cacciola of the Sea Star with Sea Star Sportfishing and the Oceanside Sea Center reported that Oceanside Sea Center boats unexpectedly had a day of fishing where they got into good bluefin action on local half and three-quarter day trips. Cacciola said that the area of fish was holding about 3 miles off the coast and was first found in the morning in the area above the Carlsbad Power Plant. Cacciola said that the fish moved steadily up the coast during the day to where boats were fishing them off Box Canyon at the end of the day.

There has been a bit of striped marlin activity in both the Catalina and San Diego regions. The past Saturday saw 3 marlin bites being reported up by Catalina in the area of the 14 Mile Bank, the area off Avalon, and in the region of the 152 Spot. Private boater Captain Louie Zimm of the Shearwater reported doing some kelp paddy hopping for yellowtail on a recent trip to the 425 Bank below Los Coronado Islands. Zimm said that while fishing a kelp paddy that he unexpectedly hooked a striped marlin on a sardine that was being fished with a 40-pound test and no leader. Zimm got the marlin alongside the boat and was reaching for his gloves to be able to grab the bill and release the fish when the line wore through where it had been rubbing against the marlin’s bill. That was an easy release!

The surface fishing at Los Coronado Islands has been good for a mix of calico bass, barracuda, bonito, and yellowtail along with a chance at a bluefin tuna. The best areas for mixed bag surface fishing have been the Middle Grounds, the north end of South Island, the Ribbon Kelp, and the South Kelp. Yellowtail has been located by finding sonar marks, meter marks, spots of fish up on the surface, trolling strikes on deep diving Rapalas, and trolling strikes on slow trolled sardines. Good choices for surface iron that work well for yellowtail and barracuda include Salas 7X lights and Tady 45’s in blue and white, mint and sardine colors.

Private boater John Carroll of Huachinango reported about his friend Mark Scott taking Huachinango to Los Coronado Islands and finding very good mixed bag fishing for yellowtail, bonito, barracuda, and calico bass. Carroll reported that Scott first started getting action on slow trolled sardines while fishing the Ribbon Kelp area in the lee of South Island. The Ribbon Kelp produced 2 yellowtail and Carroll said that Scott ended up finding his best fishing further up the inside of South Island while slow trolling sardines in the area between the Cove and the north end of South Island. Carroll said that Scott caught yellowtail, bonito, barracuda, and calico bass in that zone and that it was non-stop action.

Carroll said that Scott ended up with 4 yellowtail and lost another 3 or 4 yellowtail hookups. The water conditions were nice and the water was at 69 degrees. The fish were readily biting the slow trolled sardines that were being fished on a 25-pound test line.

The fishing along the San Diego County coast has been steady for a mixed bag of calico bass, sand bass, barracuda, bonito, reds, rockfish, whitefish, sculpin, and sheephead along with a chance at yellowtail or halibut.

The yellowtail fishing along the San Diego area coast continues to be difficult with the upper end of La Jolla providing the best chance at coastal yellowtail. The yellowtail activity at La Jolla has shown some improvement in recent days so anglers have reason to be optimistic that better yellowtail fishing could soon be coming to coastal waters. The barracuda and bonito fishing along the coast has been hit or miss but there have been occasional flurries of barracuda and bonito at the upper end of La Jolla. One of the better recent fish counts from La Jolla was aboard New Seaforth out of Seaforth Sportfishing that had 38 anglers on a half-day trip catch 15 bonito, 62 calico bass, 3 rockfish, and 3 yellowtail.

The summer fishing season has a lot to offer, be it offshore, at the local islands, or along the coast. Anglers are hoping to see better numbers of warm water offshore species such as yellowfin tuna, dorado, and striped marlin move into local offshore waters during the months of August and September and time will tell if those hopes will ring true. Enjoy the summer fishing season while it is here! Keep on fishing and I hope to see you out on the water sometime soon!