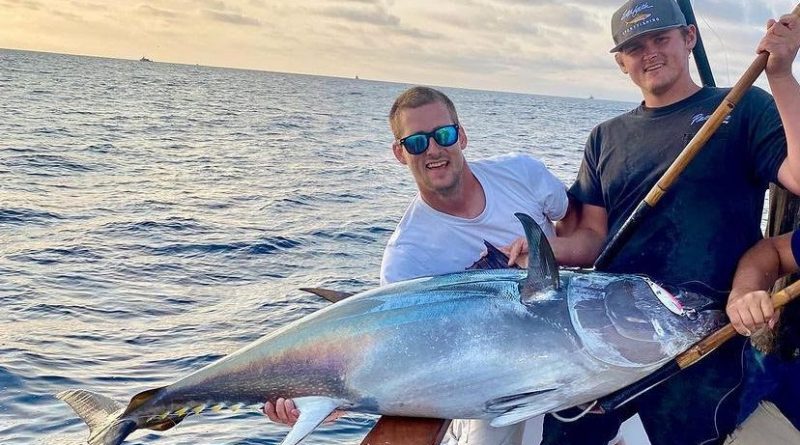 SAN DIEGO一 Southern California offshore anglers are continuing to witness the ongoing surge of improvement in the 2021 offshore fishing season. Bluefin tuna and yellowtail have been biting offshore for several months now but anglers are currently starting to see additional warmer water species such as yellowfin tuna, dorado, and striped marlin enter the picture for more variety. The offshore water temperatures have continued to warm and there is now 74-degree water being reported at the 475 Knuckle area outside of the Finger Bank.

Bluefin tuna continue to highlight offshore fishing and the massive expanse of ocean where bluefin can be located continues to expand. The past weekend saw bluefin biting around offshore banks ranging from the 475 Knuckle area that is located about 35 miles below Point Loma all the way up to the area of the 499 Spot off the backside of Catalina Island. Some of the better areas in recent days have been in the region of the 499 Spot, 2 to 6 miles northeast over to southeast of Pyramid Head at San Clemente Island, the 289 Spot, the 312 Spot, the 182 Spot, the area 4 to 20 miles southwest of La Jolla, the 178 Spot and the area 4 to 5 miles west of Point Loma.

What adds to the encouraging offshore fishing picture is that an area of kelp paddy yellowtail, with a mix of small bluefin, mixed size yellowfin, and a few dorado have been located by boats fishing the region of the 475 Knuckle in an area ranging from 30 to 45 miles 165 to 170 degrees from Point Loma. Near limit, to limit numbers, of yellowtail are being caught from this zone along with a mix of bluefin tuna and dorado.

The bluefin remains the primary focus of a lot of boats and they have been mixed size fish that have been running from 10 to 200-plus pounds with most in the 30 to 140-pound range. Productive bluefin methods have been fishing with 4-ounce torpedo sinker rigged sardines, fly lined sardines, kite fished sardines, kite fished frozen flying fish, Flat Fall jigs, knife jigs, Colt Snipers, poppers, surface iron and stick baits. Flat fall jigs and knife jigs usually are the best for fishing meter marks during the dark. Trolling has also accounted for a few bluefin and yellowfin. Trolled cedar plugs have been working for bluefin and yellowfin and kite trolled Yummy Flyers have been picking up a few bluefin. There was also a recent report from a Skipper who reported catching two large bluefin on a trolled spreader bar rig that was trolled very far behind the boat.

Private boater Robert Serdoz of Lucky Charm fished a recent trip which I believe was a solo trip. He reported working the area from southeast of the 312 Spot on out to the San Clemente Canyon out by San Clemente Island and reported seeing lots of spots of breaking bluefin tuna and a few spots of breaking yellowfin tuna. Serdoz fished until noon and was successful in catching a 60-pound bluefin tuna that bit on a mint and white color Tady 45 that he had cast to a school of breaking bluefin.

Private boater Pete Otis of Reel Deal reported about fishing on a recent trip targeting bluefin tuna. Otis found a lot of bluefin activity out to the southwest of La Jolla and said that they caught two bluefin out of six bluefin hookups. Otis said they were using 40-pound test fluorocarbon leaders to be able to fish with enough stealth to draw strikes on flylined live sardines. They were hooking good-sized bluefin and some of the hookups were broken off due to the use of light line relative to the size of fish they were hooking. The two bluefin they boated were 80-pound fish and they found their best bluefin activity at 13 miles 299 degrees from Point Loma.

Private boater Tom Golding of Last Buck reported about fishing on a recent trip where they found lots of spots of breaking bluefin tuna and said that most of the bluefin they found did not want to bite. They did get one bluefin to bite through and the hookup came while drifting and fishing with a sinker and rubber band rigged live sardine that was fished with 80-pound test.

Golding was the angler and he said it was a strong and mean bluefin and that the battle was made worse by a jerky drag on his reel and by the fact the reel’s drag kept loosening up while he was fighting the fish. Golding fought the fish for 5 hours before they were able to get it alongside the boat and get a gaff in it. Getting a gaff in the fish was not the end of the battle though as once gaffed, the fish was still green and went “berserk” and ripped the gaff out of the gaffer’s hands. Once the bluefin calmed down they were able to get it back alongside the boat and get another couple of gaffs in it to get it aboard.  The first gaff they used that got ripped out of the gaffer’s hands was a bamboo gaff which floated to the surface and they were able to retrieve the gaff after getting the big bluefin on the boat.

Captain Bob Woodard of the Christina Lynn fished a recent trip targeting bluefin and reported catching two bluefin tuna out of four bluefin hookups. Both their bluefin were 40-pound fish and Sam Minervini of the private boat Sailfish boated one of the bluefin and Woodard boated the other. Two of their hookups were on sardines, one hookup came on an iron jig cast to breaking fish and the other hookup was on a live mackerel. Their main area of bluefin activity was found at 15 miles 267 degrees from Point Loma.

Floyd Sparks of Tuna Kahuna reported about fishing on a recent trip targeting bluefin and his report was that they caught four bluefin tuna. Three of the bluefin were 60-pound class fish and the fourth was a 120-pound fish. Sparks said that all four bluefin were caught on sardines and that they found their fish out to the southwest of the 178 Spot. Sparks said that they started the day fishing at 16 miles 268 degrees from Point Loma and by the end of the day were out at 22 miles 265 degrees from Point Loma.

Bill Parker of Cabo fished a recent trip targeting bluefin and reported starting the day by working the area about 15 miles off Encinitas. They found some action in this area and hooked and lost three bluefin tuna. One bluefin was lost to a broken hook, another was lost when the reel got spooled and the other was lost to a broken line. After experiencing the three lost bluefin hookups, Parker suggested using nothing less than a 40-pound test tackle.

The good news was that their day was not over after losing the three hookups and Parker said they found another area of breaking bluefin at the Carlsbad Canyon during the afternoon where they were successful in boating a 70-plus pound bluefin tuna. The big bluefin bit on a Colt Sniper that was cast to breaking fish while fishing 4.6 miles off the Carlsbad Power Plant.

Striped marlin have been trickling into local offshore waters with a report of one marlin being caught and with several jumpers and an additionally lost hookup being reported. Most of the marlin activity has been found incidental to bluefin tuna fishing in the area of the 182 Spot and in the area out to the west and the southwest of La Jolla.

Some of the better areas for mixed bag surface fishing have been the Middle Grounds, the north end of South Island, the Ribbon Kelp, and the South Kelp. Yellowtail have been located by finding sonar marks, meter marks, spots of fish up on the surface, trolling strikes on deep diving Rapalas, and trolling strikes on slow trolled sardines. Good choices for surface iron that work well for yellowtail and barracuda include Salas 7X lights and Tady 45’s in blue and white, mint and sardine colors.

The bluefin tuna around Los Coronado Islands have been mostly 10 to 20-pound fish and the best areas for a chance at a bluefin have been at spots around and below South Island such as the South Kelp, the South Kelp Ridge, and the Lighthouse at the south tip of South Island.

The fishing along the San Diego County coast has been good for a mixed bag of calico bass, sand bass, barracuda, reds, rockfish, whitefish, sculpin, and sheephead along with a chance at scratching out yellowtail or halibut.

Sand bass have been biting well in the Imperial Beach area but inconsistent current conditions have been making it hit or miss in being able to get a good sand bass bite going. When the current is running strong it makes the sand bass fishing difficult as when the current is strong anglers can have trouble reaching the bottom with 4 ounces of weight. The best sand bass fishing has been coming from meter marks found over hard bottom areas with sand bass also biting at the Imperial Beach Pipeline and from an occasional meter mark found over sandy bottom. When conditions are favorable, some of the better half-day boat fish counts from boats fishing off Imperial Beach have included sand bass counts that are up over 100 sand bass. A recent morning half-day trip on Daily Double out of Point Loma Sportfishing had 29 anglers return with 145 sand bass.

The yellowtail fishing along the San Diego area coast continues to be slow with the upper end of La Jolla tending to provide the best chance at coastal yellowtail. Barracuda fishing has been hit or miss but the past week or so has seen several good days of barracuda fishing at the kelp beds at the upper end of La Jolla. A recent afternoon half-day trip aboard New Seaforth out of Seaforth Sportfishing saw 41 anglers catch 150 barracuda, 33 calico bass, and 2 yellowtail.

The summer fishing season just keeps getting better and with yellowfin and dorado starting to join the bluefin tuna and yellowtail that have been holding in local offshore waters we could be in for a fantastic late summer and fall fishing season. Enjoy the summer season while it is here! Keep on fishing and I hope to see you out on the water sometime soon!