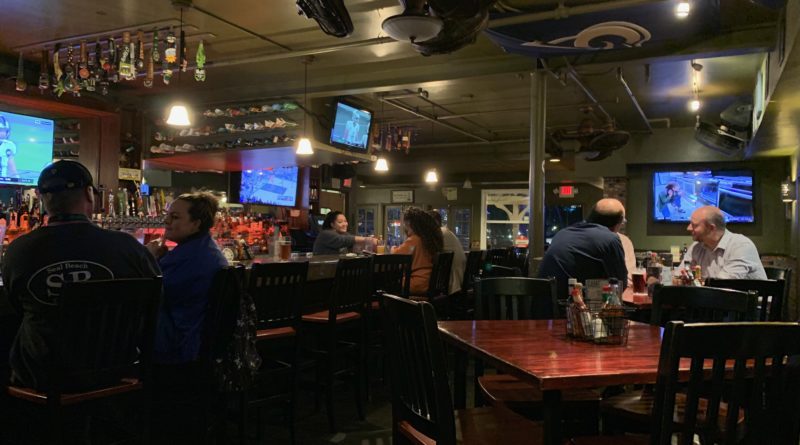 Yacht clubs aren’t the only place for boat owners to socialize. There are jaunts on the waterfront where boaters can just have a drink and talk about their latest sail.

LONG BEACH—Parimal M. Rohit, The Log’s editor, returned to Shoreline Marina in Downtown Long Beach to meet up with OC Weekly Sales Director Kevin Davis (who lives aboard his boat, Indy Sent Lady, with his wife) and engage in another banter about boating. Messrs. Rohit and Davis met near Shoreline Yacht Club on a chilly Southern California evening and walked over to Shenanigan’s Irish Pub & Grille at Rainbow Harbor and engaged in a discussion about boater’s bars. Below is their discussion – after you’ve read their conversation, chime in and share your favorite jaunts (and why you love your go-to boater’s bar).

Parimal M. Rohit: Let’s talk about bar hangouts and boaters. What’s the bar here in Long Beach where all the boaters go to?

Kevin Davis: Where we go to is Shenanigan’s, over here in Rainbow Harbor. It’s a great little Irish bar, great boater’s bar.

PMR: What makes it a boater’s bar?

KD: Well, it’s right here on the marina. They also give boaters discounts, as well – great place to go hang out after you’ve been out on the water, or just want to grab something to eat. Great place to go catch a football game. The fact it’s so convenient to the marina here, it’s a great little place.

PMR: I’m assuming the fact that Shenanigan’s is a boater bar, there are plenty of boaters here sharing boating stories.

KD: If you’ve been out all day you can come in and have a few stories, maybe throw a few down – the stories become better.

PMR: So there’s some extra yarn being added!

KD: Absolutely! There’s nothing like going out on the water when, you know, when the wind is 20 knots and it was actually only seven. You’re barely treading water. But people share stories, talk about their boats. We talk about what it’s like to own a boat, what it’s like to live on a boat.

PMR: Are there ever conversations on something more technical, like maintenance or repairs?

KD: A little bit, yeah. You’re not going to get too technical in a bar, because there are drinks being thrown. People might think they’re getting technical, but not so much. People will share things about sailing techniques and things like that, how to set your sail. But it’s also about stories. It’s not just the stories of the day but stories of places you sailed to [and] went to. It’s also a great place for people coming and going from Catalina, as well.

PMR: Is there a certain personality or characteristic that distinguishes a boater bar from any other bar out there?

KD: A little bit. You gotta have a little more salt to it, little bit more personality. Because it’s a boater’s bar, you don’t want a lot of niceties. And, of course, the characters that come and go.

PMR: Do boater’s bars vary from marina to marina or all they all sort of the same?

KD: I think they do [vary from marina to marina]. It depends upon … [on] the types of boats and where you’re located at; we’re here in Long Beach, you go to a boater’s bar in Newport Beach – it’s going to be a little different, just because of the folks that are in Newport versus the folks here in Long Beach. You’re going to have a variety. Even the boater’s bars that you find in more of the B.V.I. and places like that, [it’s] much different, more along the lines of the environment of the area.

PMR: Beyond the bars, what other areas in or around the marina are the great social places for boaters to patronize and spend their time?

KD: We got a great ice cream shop, got a number of restaurants here to go and eat. If you live on a boat, like we do, it’s nice to go somewhere and get off the boat. For us, it’s going out, it’s date night or getting off to go have breakfast and coming up to watch the football game.

PMR: What is the interaction between boaters and non-boaters at a boater’s bar?

KD: I think there are a lot of people out there that have that dream of owning a boat, living on a boat, sailing a boat, and so if the conversation starts up with someone … and they find out that we’re liveaboards, the first thing out of their mouth is, “Oh my God, I’ve always wanted to do that.” And then, of course, they ask you lots and lots of questions about what it’s like, how do you deal with this, how do you deal with that. For us, it’s just a normal way of life. For a lot of people … just like we did, when we first thought about it, we thought it was a dream that was not necessarily reachable.

PMR: How would you distinguish a boater’s bar from a yacht club?

KD: Well I don’t have to pay a membership fee to go to the bar. They have very similar characteristics. The yacht clubs are little bit more structured. You’re going to see a lot of the same people [at a yacht club], whereas at a bar you’re going to get a variety of individuals.

PMR: What do you love most about spending time at a boater’s bar?

KD: I think it’s a little of everything, honestly. You get the people, and you’re in a social environment. Let’s face it, that’s what a bar is about. And then you throw some good food in play and you get some great atmosphere … you’re just kind of hanging out, enjoying the day or the afternoon or the evening.

2 thoughts on “Boater Bars: A Place to Bond and Connect”