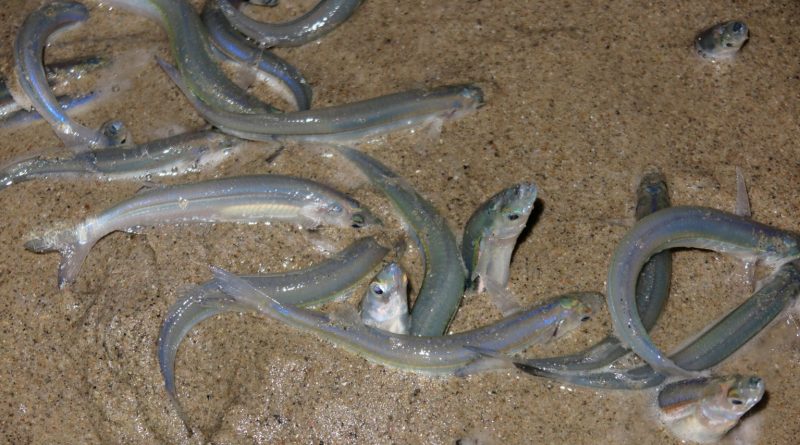 April and May mark the closed season for grunion runs up and down the Southern California coast.

SOUTHERN CALIFORNIA一 Closed season for the grunion run started at midnight on April 1 and will run through the end of May.

California grunion is a species of saltwater fish native to Southern California and northern Baja.

The grunion run is a peculiar phenomenon where the small silver fish will leave the water at night to spawn on the beaches.

The female grunion will swim onto the beach while a wave is breaking and use her tail to burrow into the sand and create a nest where she can deposit her eggs and the male will fertilize the eggs before returning to the ocean.

The eggs remain in the sand for roughly 10 days before the high tides take the eggs back out to see where they hatch.

Grunion runs happen periodically throughout spring and summer, starting in March and ending in August.

In the 1920s, a study was done that showed a distinct decline in the grunion population and in 1927 a three-month closed season was implemented. The population improved and the regulation was shortened to two months between April and May which still stands, according to the CDFW website.

The event can last up to two hours and has become a popular viewing activity in Southern California for its peculiar nature.

The CDFW run schedule predicts when the runs will start at Cabrillo Beach near Los Angeles Harbor’s entrance, the CDFW said that the times can vary up and down the coast. The CDFW predicts that San Diego is five minutes ahead of Cabrillo and Santa Barbara will run 25 minutes behind.

The closed season is observation-only, open season will resume in June. Anyone over 16 will need a valid California sport fishing license, with the ocean enhancement stamp to catch grunion.

For more information first the CDFW website at https://wildlife.ca.gov/Fishing/Ocean/Grunion#28352306-2021-runs.

One thought on “Grunion Run on California Beaches”

Leave a Reply to Gerald b Hoover Cancel reply