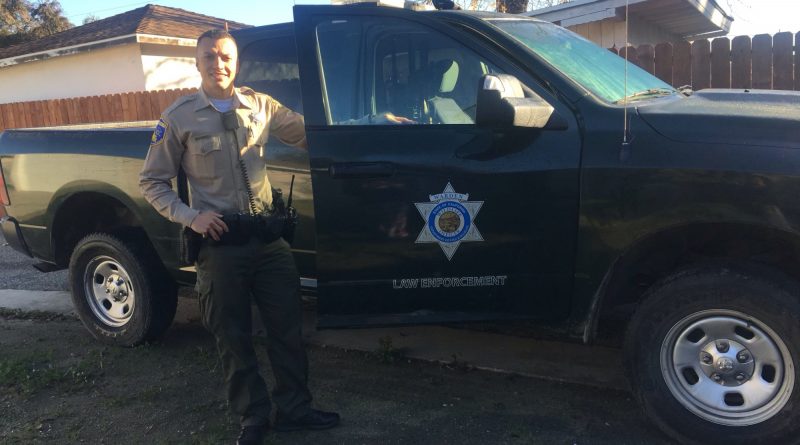 Warden Jonathan Garcia, who works in Los Angeles County, is named the California Department of Fish and Wildlife officer of the year. CDFW photo

California Department of Fish and Wildlife said the Los Angeles County-based wildlife officer has led many notable investigations including finding violators who use throw and gill nets.

LOS ANGELES— On April 14, the California Department of Fish and Wildlife Law Enforcement Division announced Warden Jonathan Garcia had been selected as 2020 Wildlife Officer of the Year.

“I was surprised, it’s a very special acknowledgment and I guess hard work does pay off sometimes,” said Garcia.

The Los Angeles County-based wildlife officer has been with the department since 2018. The CDFW said he has led many notable investigations that resulted in successful prosecution of poachers over the past few years.

“Warden Garcia’s immense case load involved a wide variety of violations including illegal take of deer, take of lobster out of season, feeding bears, unlawful importation of restricted species, license fraud, take of mountain lions, take of bear out of season, use of throw nets and gill nets, and many others,” said David Bess, CDFW deputy director and chief of the law enforcement division, in a released statement. “For a wildlife officer who has only been with CDFW since 2018, that’s extraordinary performance. He’s an invaluable asset to us here at CDFW and the citizens of Los Angeles.”

The CDFW said the writing and serving of a recent search warrant for a man suspected of illegally trapping wildlife helped Warden Garcia earn the nomination. Warden Garcia found the suspect had trapped and killed two mountain lions and one bear using homemade traps baited with dead goats. The investigation revealed one of the lions and the bear were neglected once caught in the trap. The same investigation revealed a live gray fox in a different homemade trap that was subsequently released, and an additional 11 dead raptors on the property. Garcia and his squad mates arrested the suspect on Mar. 29 and the case is pending prosecution.

“I find it fascinating protecting wildlife, they don’t have a voice,” said Garcia.

Garcia has also been involved in finding violators who use illegal methods of take while fishing the coast, including throw and gill nets. Garcia and another wildlife officer located a group of suspects who were poaching at night in the Malibu surf with a gillnet. The suspects possessed 30 unlawfully taken fish, including three undersized halibut. Garcia has also made multiple throw net cases on the West Fork of the San Gabriel River, one of only a few streams that still hold wild trout in Los Angeles County.

Garcia also contributed to a Los Angeles County Sheriff’s Department murder investigation. While patrolling a remote area in the Angeles National Forest, Garcia noted the odor of what he thought was an animal carcass of a possible poaching case but instead found a decomposing human body. The body was identified as a victim of a violent murder the Sheriff’s Department was investigating.

CDFW said Garcia was recently nominated to become a field training officer where he will be entrusted to train and observe recent academy graduates during their first few months in the field.