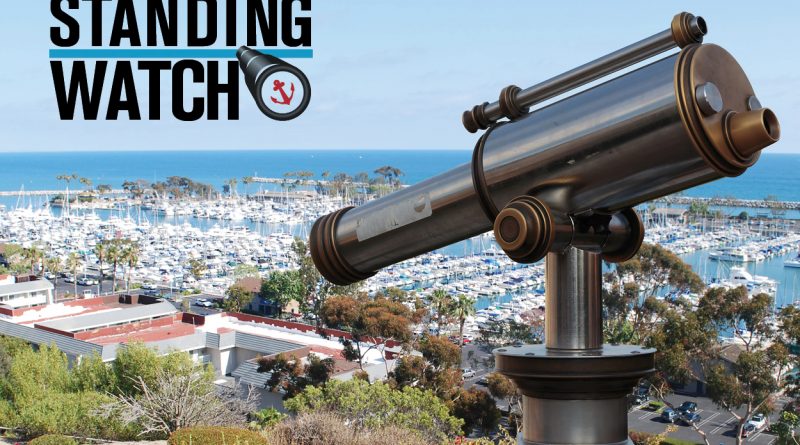 SOUTHERN CALIFORNIA— They say history repeats itself. If we looked back to the sudden and largely unexpected stock market crash on Oct. 19, 1987, and its effect on vessel sales, we might have had a rose-colored glasses outlook for the boating industry at the onset of COVID-19, which was declared an official pandemic by the World Health Organization just about one year ago on March 11, 2020.

In January, the National Marine Manufacturers Association reported more than 310,000 new powerboats were sold in 2020, levels the recreational boating industry has not seen since before the Great Recession in 2008, according to NMMA. In California specifically, NMMA told the Log retail sales of new powerboats grew for the ninth consecutive year in 2020 to a twelve-year high, on par with levels from 2008.

While the exact reason for vessel registration numbers being down in the state in 2020 compared to the year prior is unclear, possible reasons could include the fact that California vessels are registered in two-year cycles in odd years; more sales of used boats transferring with the existing slip; The existence of undocumented vessels on the water; or a completely different reason altogether.

The topic of vessel registration numbers came up at the California Boating and Waterways Commission meeting on Feb. 11 during a discussion about a state budget proposal to increase the biennial boater registration fee by 250 percent as early as July 1. Commissioner Kenneth Ehrman asked about the estimated number of registered boats in California and raised concern about the number of unregistered boats.

“I’m concerned, maybe enough effort isn’t made to require those boats to pay their fair share or some type of enforcement effort to be encouraged like we do with vehicles on the street or increasing penalties, but it allows a lot of people to simply go years without registering their boat while other people who are trying to abide by the law are paying these increases in fees,” said Ehrman at the meeting.

An increase in that biennial boater registration fee from $20 to $70 every two years could be coming this year, a headline that the Log has seen before.

That increase came due to the passage of California Assembly Bill 2443, which authorized the assessment of additional funding for the Department of Boating and Waterways for the implementation and administration of a quagga and zebra mussel monitoring, inspection, and eradication program.

The COVID-19 pandemic seems to have spurred growth in the boating industry and it wasn’t the first time an event with catastrophic economic impacts has spurred growth within the sector. Following “Black Monday,” the global stock market crash on Oct. 19, 1987, was another booming year of success for those in the boating industry. A headline from a Log article published on Jan. 20, 1989, read “Recreational Boat Sales for ’88 Said Best Ever.”

“Despite analysts’ predictions one year ago that the nation’s boatmakers were headed for a steep fall resulting from the stock market crash of 1987, sales of recreational pleasure boats hit an all-time record 750,000 units in the 1988 calendar year, the National Marine Manufacturers Association reported,” stated the article.

The article went on to say market observers were also sure boating would stumble with the 1988 summer drought but it actually drove boat users and buyers to the water in increasing numbers resulting in a sixth straight year of sales gains. The article stated figures from NMMA translated to a growth of 4.8 percent in boat units and 8.65 percent in dollar volume.

A letter signed by more than a dozen boating-related groups in California, including the Recreational Boaters of California, was sent to the Assembly Budget Subcommittee on Feb. 16 asking for the proposal to increase the vessel registration fee by 250 percent be revised to reduce the registration fee increase to “an amount significantly less than 250 %” and redirect a “small, yet reasonable portion” of the $107 million in annual boat fuel tax dollars to the Harbors and Watercraft Revolving Fund. What do you think of the proposed 250 percent registration fee hike?  Written testimony can be emailed to the below contacts.