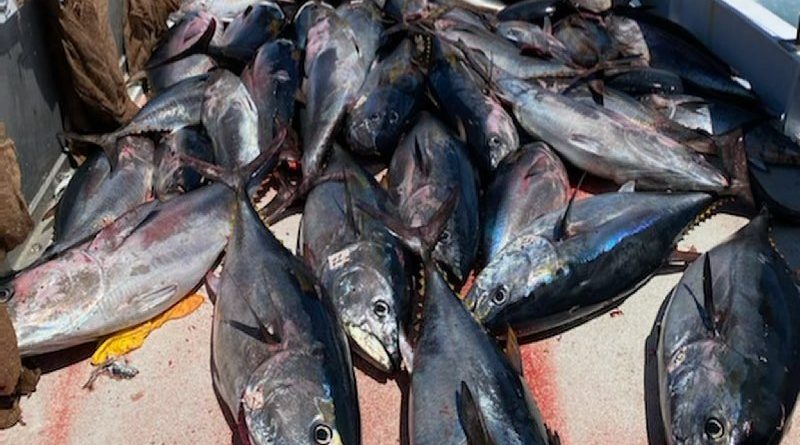 SOUTHERN CALIFORNIA一 Southern California offshore anglers are seeing the summer fishing season hitting its stride, the summer season continues to be highlighted by good offshore fishing for bluefin tuna and yellowtail. What is exciting to see is that a few yellowfin tuna are also starting to show up in the mix and the past week of fishing also saw an albacore and a dorado. Anglers are hoping that the recent showing of yellowfin tuna, dorado, and an albacore are a sign of good things to come as the summer season progresses.

The catch of an albacore in local offshore waters turned a lot of heads. Point Loma Sportfishing reports that New Lo-An recently caught a 25-pound albacore while on a 1.5-day trip that had a fish count of 24 anglers, 12 bluefin tuna, and a 25-pound albacore. Their bluefin tuna ranged in size up to 200 pounds. I believe that the albacore was caught while targeting bluefin tuna while fishing the deep water outside of the 43 Fathom Spot. Anglers are hoping this catch of an albacore is a sign that more albacore will be coming our way.

Bluefin tuna continue to highlight the offshore catches and some of the better sport boat counts have included limits of bluefin tuna. The bluefin have been running from 18 to 240-plus pounds with a high percentage of the fish falling within the 30 to 120-pound range. The kelp paddie yellowtail have ranged from 4 to 20 pounds and the few yellowfin tuna that have been caught have mostly been in the 15 to 25-pound range with a couple of larger yellowfin to 80 pounds also being reported.

The bluefin tuna are currently being caught in spots over a vast area ranging from the San Clemente Canyon (while fishing to the west and northwest of the 43 Fathom Spot) on down to the waters outside of Punta Santo Tomas located below Ensenada. Some of the better areas within that zone from the past few days of fishing are the San Clemente Canyon, the 178 Spot, the 9 Mile Bank, the Coronado Canyon, the 224 Spot, the 425 Bank, the Finger Bank, the area ranging from the northwest over to southwest of Todos Santos Island, the Banda Bank and the area below the Banda Bank on down to where you are fishing outside of Punta Santo Tomas. The fish have been up and down and moving around from day to day and new hot spots have been popping up in different areas almost every day.

An effective bluefin method for private boaters when working spots of bluefin that are found on the surface has been casting poppers, stick baits, colt snipers, and surface iron to the spots of breaking, breezing, foaming, or puddling fish. Flylined sardines have been one of the best methods for private boaters that have been drifting over meter marks.

Private boater Lee Fleming of Jawbreaker reported about fishing a 2-day trip over the Fourth of July weekend. On Saturday morning they found bluefin biting while fishing off Ensenada about 6 miles to the northwest of Todos Santos Island. They caught 3 bluefin out of 5 hookups out of that bite and the 3 bluefin were nice-sized fish that weighed 45 pounds, 65 pounds, and 115 pounds. Fleming reported that the 115-pound bluefin was caught by his friend Dave Rehrer.

After catching the 3 bluefin Fleming said that they fished their way back to the Coronado Islands where they had a barbecue and spent Saturday night on the anchor. On Sunday morning, Fleming reported that they fished at the Coronado Islands and had some fun catching a mix of calico bass, barracuda and reds before heading out to the 302 Spot to look for more tuna. He said they found lots of working birds and meter marks while fishing the region of the 302 Spot and while between the 302 Spot and the 9 Mile Bank but could not get any response from tuna while fishing those areas.

The fishing at Los Coronado Islands has been good for a mix of calico bass, barracuda, yellowtail, bonito, halibut, reds and an assortment of rockfish. Not many boats have been fishing around Los Coronado Islands lately due to the good tuna fishing offshore but Point Loma out of Point Loma Sportfishing fished a recent full-day trip and had a fantastic fish count of 16 anglers catching limits of yellowtail (80 yellowtail), 45 calico bass, 23 barracuda, 10 rockfish, and 2 bonito.

Some of the better areas for mixed bag surface fishing have been the Middle Grounds, the north end of South Island, the Ribbon Kelp, and the South Kelp. Yellowtail have been located by finding sonar marks, meter marks, spots of fish up on the surface, trolling strikes on deep diving Rapalas, and trolling strikes on slow trolled sardines. Good choices for surface iron that work well for yellowtail and barracuda include Salas 7X lights and Tady 45’s in blue and white, mint and sardine colors.

The bottom fishing around Los Coronado Islands continues to be good and some of the best spots have been at the hard bottom to the northwest and north of North Island in 30 to 50 fathoms.

The fishing along the San Diego County coast has been good for a mixed bag of calico bass, sand bass, barracuda, reds, rockfish, whitefish, sculpin, and sheephead and also provides a chance at scratching out a yellowtail or halibut.

Calico bass have been providing the best surface fishing along the San Diego County coast and productive kelp bed and hard bottom areas for calico bass are the Imperial Beach Pipeline, the hard bottom to the northwest of Buoy #3 at Point Loma, the Dropoff at Point Loma, the Green Tank at Point Loma, Point Loma College, the Roundhouse at Sunset Cliffs, the Jetty Kelp outside of Mission Bay, the upper end of La Jolla, Del Mar, Solana Beach, Leucadia, South Carlsbad, and the Barn.

Sand bass have been biting well in the Imperial Beach area with the Imperial Beach Pipeline and hard bottom areas off Imperial Beach producing a mix of sand bass, calico bass, barracuda, sculpin, sheephead, and an occasional halibut. Some of the better sand bass counts on recent half-day short boat trips out of San Diego Bay have been up in the 50 to 100 fish per boat range.

The yellowtail fishing along the San Diego area coast continues to be slow with the upper end of La Jolla tending to provide the best chance at a coastal yellowtail. Look for spots of breaking fish under working birds out in the 18 to 40-fathom depths and also look for an occasional yellowtail hookup incidental to fishing for calico bass along the edges of the kelp beds. Surface iron, yo-yo iron, fly-lined sardines, and slow trolled mackerel have been good choices for yellowtail with surface iron usually working best when cast to breaking fish.

Barracuda fishing has been improving and has been fair to sometimes good for boats fishing the Imperial Beach Pipeline, hard bottom areas off Imperial Beach, the Whistler Buoy at Point Loma, and the kelp beds at the upper end of La Jolla.

Productive hard bottom and structure areas for the reds, rockfish, whitefish, and lingcod are the Imperial Beach Pipeline, the International Reef, the Whistler Buoy and the Dropoff outside of Point Loma, the Green Tank at Point Loma, “The 270” out to the west of Mission Bay, the upper end of La Jolla, the ridge outside of Del Mar and at hard bottom areas off South Carlsbad, Leucadia, and Box Canyon.

The summer fishing season continues to deliver with good and continuously improving fishing being found offshore, at the Islands, and along the coast! I hope you can get out and enjoy as much fishing as possible while we are in this summer season.  Keep on fishing and I hope to see you out on the water sometime soon!