SAN DIEGO — Hugo Carver, a prominent figure in San Diego’s maritime industry, died on June 1, his family and associates confirmed. He was 72. 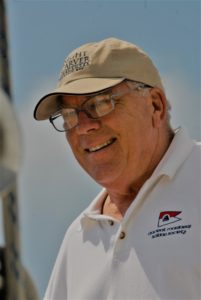 Carver, who was the second half of the yacht building company Knight & Carver, lost an 18-month battle with ALS, commonly known as Lou Gehrig’s disease.

John Freeman, who penned Carver’s remembrance and submitted it to The Log, elaborated on the man’s personality and practices.

“Ever the innovator, Carver – who was known to all who knew him as simply ‘Hugo’ – initiated many of the maritime firm’s new-build techniques, many based on doodles drawn in pencil on scratch paper,” Freeman wrote.

Such innovation certainly played out in the early 2000s, when Knight & Carver expanded its services to the manufacture and repair of utility-scale wind blades. The wind blades were made of the same fiberglass composite materials the company used in boat hulls. Wind blade production plants operated out of National City and Howard, South Dakota.

The remembrance detailed Carver’s foray into the yacht building space, which goes back to 1971.

John Knight – the other half of Knight & Carver – reminisced on his first interactions with Carver. The two first met at California Maritime Academy in 1963, when they were 18 years old and freshman roommates.

“We were classmates, roommates several times, shipmates on two merchant ships, and business partners,” Knight stated. “Hugo was so unique in so many ways. He was full of life, witty, and wonderfully salty with an abundant sense of humor. He was a walking encyclopedia on many subjects, but especially boating knowledge.”

They both graduated in 1966 and were assigned SS President Pierce, a 535-foot cargo ship, as licensed marine engineers.

“During that initial six-month deployment, they served together in Manila, Saigon, Hong Kong, Japan, Indonesia, Malaysia and Panama,” Freeman wrote. “They later served on the SS President Tyler, a 565-foot hybrid container ship known as a ‘SeaRacer,’ forging history as the modern era of container ships evolved.”

Knight and Carver partnered together five years later, when they created Knight & Carver Yacht Center in 1971. The partnership spawned when Knight, who launched a boat-repair business in San Diego, asked Carver to join him in the business endeavor.

The company grew into a major presence on the West Coast during the next 40 years, what with 100-plus custom-made yachts built and about 40,000 boats repaired by Knight & Carver. It first opened on Hancock Street near San Diego Sports Arena and moved to Mission Bay Marina before settling at its largest location in National City.

The company finally closed in 2013.

“Throughout our careers we were always at the forefront of the maritime industry’s latest trends in engineering, design and new-build,” Knight said in Freeman’s remembrance.

Carver was also an avid sailor, according to Freeman. He was a member of Silver Gate Yacht Club and Ancient Mariners Sailing Society. Many times he could be found aboard Nirvana, a 64-foot Alden cutter his parents acquired in 1958. Carver and his family reportedly lived aboard Nirvana in the 1970s.

Both Carver and Knight participated in boat races to Ensenada, as well.

“We won many a race to Ensenada with Hugo in charge,” Knight stated in Freeman’s remembrance. “And the after-parties were always more than memorable.”

Carver was born on April 12, 1945 and was one of six children (three brothers and two sisters). He spent portions of his youth in Northridge and Newport Beach. He was a competitive swimmer and led the Newport Harbor High School swim team to a national championship. Carver also body surfed regularly at The Wedge.

He later settled in San Diego, living aboard his family boat initially before moving into a landside home in San Diego’s North Park. His family later moved to another home in Point Loma.

“In his later years while at Knight & Carver, he would cheerfully lead dozens of employees in early-morning yoga and stretching drills,” Freeman wrote in his remembrance. “Until slowed by his ALS diagnosis in 2015, he could be seen piloting his prized 23-foot crimson-and-gold sailboat Cat’s Paws, and joyfully peddling his bicycle around San Diego.”

Carver was married to his wife, Marjie, for almost 50 years. They had two daughters together – Jennifer Carver Jones and Serena Carver Noble – as well as seven grandchildren.

Jones, unfortunately, was killed about two weeks after Carver’s death. A car reportedly struck her while crossing the street near a school in the Clairemont neighborhood of San Diego. She was 41 and was survived by her husband and two children (Maya, 11, and Hugo, 5).

The family suggests making a contribution to the ALS Association, Greater San Diego Chapter in lieu of flowers.

John Freeman, who managed communications for Knight & Carver, contributed to this article.