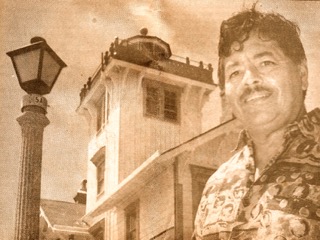 SAN PEDRO — Julian C. Jimenez, the last resident of the Point Fermin Lighthouse, has died. He was 76.

The longtime San Pedro resident who has organized and executed the city’s Fourth of July show for several years passed away on June 10.

Jimenez graduated from Cathedral High School in 1957 and went on to serve as a dedicated public servant to the city for more than 35 years, retiring from the city of Los Angeles as a Parks Maintenance Supervisor in the Point Fermin Maintenance District. He served as the last resident of Point Fermin Lighthouse for 22 years.

“When he moved to the lighthouse in 1980, he fully embraced the people of San Pedro! He came to know just about everyone in town and came to the aide of many strangers just visiting San Pedro,” Point Fermin Lighthouse Historic Site and Museum staff wrote in a tribute to Jimenez in a recent newsletter.

He was well-known in the community and was instrumental in the revitalization of the lighthouse as it made its transition to a historical museum, and he played a large role in the renewal of the Improved Order of Redman Lodge in San Pedro.

The father and grandfather volunteered on several committees ranging from long-term community projects to annual community events. As a licensed pyrotechnic display operator, Jimenez was in charge of executing the fireworks display at Cabrillo Beach, the Port of Los Angeles, city of Lomita and the city of Long Beach and San Pedro High School.

He enjoyed fishing, spending time with friends and helping others; was a licensed HAM radio operator and co-owner of a two-way radio rental company.