Long-time liveaboard on classic boat in San Diego passed away

SAN DIEGO ― Ken Spaulding, a long-time liveaboard on a classic boat in Shelter Island and then at Koehler Kraft boatyard, died on March 20. His cause of death was due to sepsis brought on by an infection of a mechanical heart valve. He was only 64.

His boat, Herta, was built in 1956 by Heinz Braun. He purchased the 33-foot full sloop wood cutter in 1991 and lived aboard her for most of the 26 years in which he owned her. 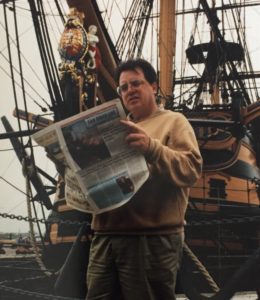 He was a member of the Convair Sailing Club, the Ancient Mariners Sailing Society and the U.S. Coast Guard Auxiliary at various times.

He took great care of his boat as well as his first mate, his Dalmatian named Molly. His dog, Molly, passed away at the age of 16 on Feb. 24, less than a month prior to his passing.

His daughter, Stacy Spaulding, will be welcoming guests aboard Herta at the annual Koehler Kraft Wooden Boat Festival in San Diego on June 17 and 18.

The family is seeking a buyer “who is interested in the long-term integrity of wooden boats.”

A burial at sea is planned for sunset on Father’s Day, June 18, immediately following the wooden boat festival. Ken Spaulding’s ashes will be combined with his beloved dog’s ashes as was his wish.

One thought on “Obit: Ken Spaulding”