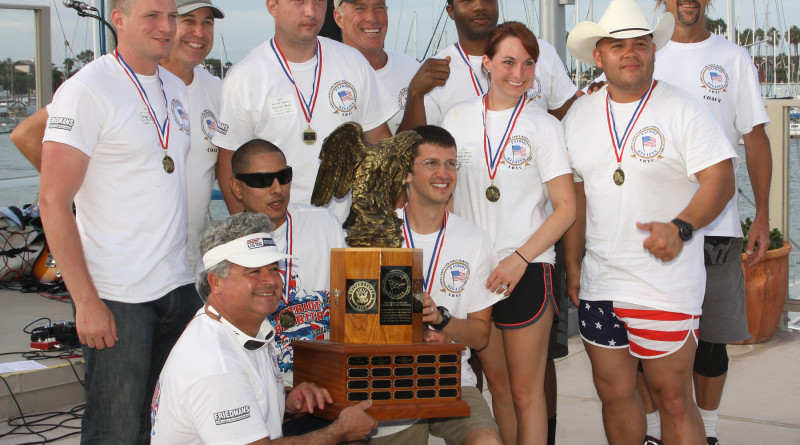 LONG BEACH — The U.S. Air Force Team 1 dominated the fourth annual Patriot Regatta Sept. 12 to win over the four other branches of this country’s military in this regatta held by Long Beach Yacht Club, supported by the USO and sponsored by Switlik, Friedman’s Appliance, and Bozzani Motors to honor active duty members of America’s military.

“I didn’t even know about this until yesterday,” said Dahl. “I found out they had a few slots open and I took it. I showed up but didn’t know what to expect.”

Teammate Behrendt said, “The coaches really helped us figure out how to get it done. Some of them were skilled Laser sailors.”

Hood added, “We had a great time, a once in a lifetime experience.”

Not all of the sailors in the regatta were human. One was a very special Labrador therapy service dog, John Jameson, affectionately known as J.J.

J.J. belongs to Army national Guardsman Ryan Healy who suffered head trauma as a paratrooper and relies on this friend daily.

“This was tons of fun,” said Healy. “I think anyone that has this opportunity should take it. It’s great to find an activity that I can do. I really had a blast.”

The Patriot Regatta was first held in 2012 as an inspiration of Long Beach YC member Jon Turigliatto who is also a Judge Advocate for the club. He had wanted to hold this type of event for a while but it wasn’t until 2012 that it all came together.

Quoted from a previous story back in 2012, Turigliatto said, “We presented a draft of this event to the Sailing Foundation last year, asking to do an event for the armed forces. Everyone thought it was a great idea.”

Fellow members Judy and Steve Meyer were also passionate about wanting to do something for our nation’s service men and women. Long Beach YC and the Sailing Foundation supported the idea and the regatta was created.

Patriot Regatta director Judy Meyer expressed why this regatta means so much to her: “I have the highest level of respect for the men and women of our military who put their lives on the line, so I may feel safe and secure in my own life. Our military and their families are such a worthwhile group of people. I wanted to do something nice for them. This regatta is my way of giving back and saying thank you.”