Racing in the Alamitos Bay Marina on a 2.5-nautical-mile course in 10-12 knots of breeze, the six skippers and crew wound in and around the marina from the beach on the peninsula to the 2nd Street Bridge. At the end, Tande beat second place finisher, Daniel Gorman by only one boat length. 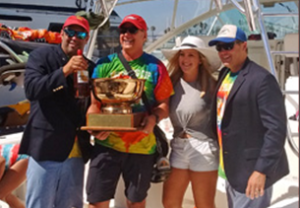 “This was a well-done race,” said Tande, “designed to be enjoyable and fun. It was a structured race but there were a few nuances [smiling] that made it interesting. This was one of the most enjoyable races I have participated in.”

One of the nuances that Tande might have been referring to was when the race committee asked several boats do penalty turns during the race, with some skippers not quite clear as to why they had to do the turn. But everyone complied and seemed to have an enjoyable time on the water.

“Dan Gorman has been a great guy,” Tande said, “in taking time to help me with tactics sailing abilities, and in making me a better sailor. The Soling program is not just about racing, it is more about how to be a good sailor.”