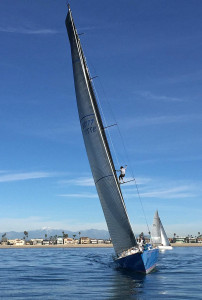 “The fleet was very diverse,” Lane said after winning the Long Beach race Jan. 8. “Having Zephyrus [Damon Guizot’s Reichel-Pugh 77] out there was nice. This was an easy race today with no tacking on the first two legs.

“[Ray Godwin’s Farr 40] Temptress was still ahead at the last mark,” Lane continued. “We were staying right with them when the wind dropped and our boat just stopped. The wind picked up again and Temptress tacked… we didn’t, and we pulled away.”

Co-skipper Lisa Meier said, “We want to thank the race committee for very efficient work. The mark set people and everyone else on the water did a fantastic job.”

This Long Beach Yacht Club (LBYC) traditional first-of-year Two Gates Pursuit Race is named for the course layout, which winds in, around and through Long Beach and Los Angeles Harbors entrances or “gates.”

However, with sometimes-inconsistent winter winds, the 13.2-nautical-mile primary course is too long for the participants to finish within a reasonable time.

The current Southern California storm systems are bringing us much needed rain, but the usual moderate to strong Long Beach breezes didn’t show this weekend.

For the second year in a row, the race committee wisely chose to use the alternate 5.17-nautical-mile short course when, near the scheduled start time, 2-3 knots was all the wind there was going to be for the day.

There were 18 competitors at the start, each of them meandering their way around Long Beach Harbor ultimately finding their way to the finish line.

LBYC re-invented their long-standing Two Gates Invitational race in 2012 and turned it into a pursuit race keeping the traditional 13.2-nautical-mile course.

Top finishers in their class