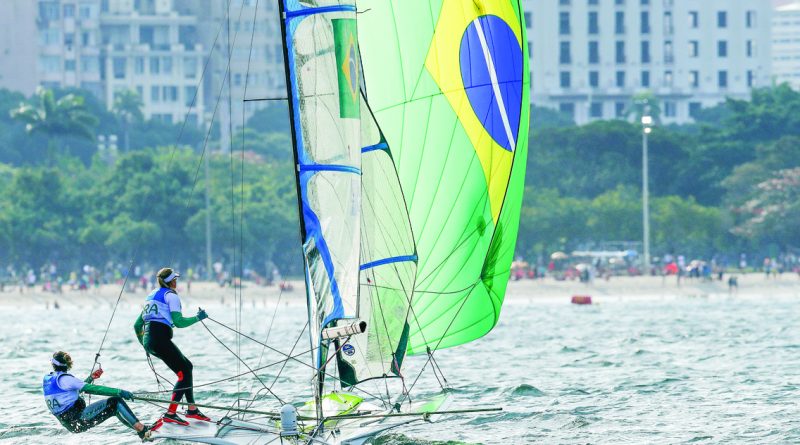 The classes signed a memorandum of understanding with the Long Beach Olympic Classes Organizing Committee to hold this joint world championship ahead of the 2028 summer Olympic games in Los Angeles.

LONG BEACH一 Sailors hoping to compete in the 49er, 49erFX, and Nacra 17 classes at the 2028 Olympic games in Los Angeles will have the chance to compete in local waters in a World Championship event set for 2025.

It was recently announced the 2025, 49er, 49erFX, and Nacra 17 World Championship will be held in Olympic waters off the coast of Long Beach.

“Any young and ambitious sailors in America should perk up their ears at these opportunities,” said Luther Carpenter, U.S. Olympic Head Coach at US Sailing, in an April 22 press release from US Sailing. “Community, a strong domestic schedule, top-notch training, ‘mini-campaign’ opportunities, and brushing shoulders with the best is all available in our backyard. It’s a great time to focus on tackling a new boat and new goals. It’s a great time to embrace the idea of the journey, meet sailors from other areas of our country, and be told ‘you’ve got talent – here are some tips for getting up to speed’.”

The classes signed a memorandum of understanding with the Long Beach Olympic Classes Organizing Committee to put in place the plans necessary to hold this joint world championship in the first year of the L.A. quadrennial, according to the Narca 17 Class website. The LBOCOC was formed to run key Olympic Classes racing in Olympic waters and has already begun planning an annual event set to start this summer. This is the LBOCOC’s first agreement to host a major championship.

“Nacra 17 sailors love to go fast and Long Beach is known for its amazing sailing conditions, and it will be a fantastic spot for our Worlds in 2025,” said Nacra 17 Class President, Nathan Outteridge, in a March 16 released statement.

Over the next few years, the LBOCOC will work with all local and national stakeholders to define the exact shape and form of the 2025 championship. This will be the second World Championship held in North America in the coming years. In 2022, the Worlds will be held in Halifax, Canada.

Carpenter said a unique component of these three class championships is that they require no qualification to attend and all gender-eligible teams (49er men, FX women, Nacra mixed) are encouraged to attend.