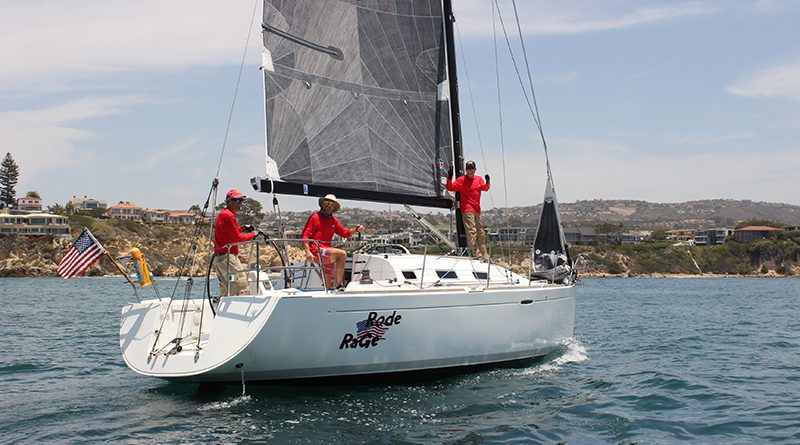 Rode Rage out on the water circling the starting line as the start time approaches. Katherine M. Clements photo.

The Friday race started off the coast of Newport Beach, where three different races were launched at 1 p.m., 1:05 p.m., and 1:10 p.m. Fifteen teams raced throughout the entire weekend, raising between $11-$13,000 over the three-day event. One boat alone, named Tomol, a Catalina 385 skippered by Bob Langan and Sue Greisbach, raised $7,200. Tomol also held the title for most money raised in the 24th Annual Charity Regatta last spring. The DWYC believes that after all the donations are totaled between all activities, including the races and auction, they will have raised $55-60,000 for the American Cancer Society. The official amount raised will be announced on June 11.

The race on Friday ended later in the day, off the coast of Dana Point, as racers passed by the tetrahedron, an orange flotation device used as a marker for the starting and finish line.

Skippers were invited to enjoy breakfast at 9 a.m. at the Dana Point Yacht Club Saturday morning before participating in Saturday and Sunday’s races. PHRF and Crusier Classes raced in bouy and random leg races this weekend.

Overall winners by race class are:

The full results have been posted to the DWYC website.

Next up, the Dana West Yacht Club will be starting its Summer Beer Can Wet Wednesday’s series on June 15.

The virtual auction is still available, and items to bid on include handmade goods such as quilts and other home goods, themed gift baskets, a day at the Del Mar race tracks, a Caribbean getaway in Antigua, and other vacation getaway opportunities. For more information or to bid on the items, see http://dwyc.org/.