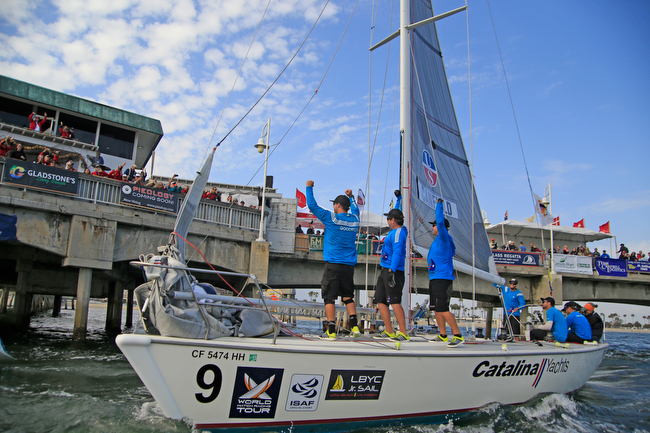 LONG BEACH — The Congressional Cup, which is known as the grandfather of modern match racing, will feature a roster of top ISAF-ranked skippers during the 2016 series hosted by Long Beach Yacht Club, April 5-10.

“In the past we have welcomed Betsy Alison, five-time Rolex Yachtswoman of the Year, and Olympic medalist JJ Fetter, to our field of competitors,” said Congressional Cup Chairman Camille Daniels. “Our heritage is all about having the best sailors in the world, competing in our spectacular venue in equalized boats.”

The regatta is sailed in identical 37-foot Catalina keelboats designed specifically for the event.

“We’re excited to see Sally return to Congressional Cup this season,” said Daniels, noting that Barkow competed in the Congressional Cup in 2010, after winning the Ficker Cup qualifier. “She’s exhibited extraordinary skills in a variety of sailing disciplines – match racing, the Olympics, and most recently the Volvo Ocean Race, as tactician of Team SCA.

“She’s already proved she can mix it up with the boys,” Daniels added, citing Barkow’s performance last month in the M32 Series in Bermuda.

The Congressional Cup has been one of the world’s premier match-racing events since 1965 – and a gateway for yachting greats like Dean Barker, Dennis Conner, Ted Turner, Bill Ficker, Peter Holmberg, Taylor Canfield, and many more. The regatta pioneered on-the-water umpiring in 1988 and set the bar for high-level match racing competition, according to race organizers. More than 300 volunteers helped with the event.

The race can be viewed from the Long Beach Veteran Memorial Pier. Visit thecongressionalcup.com for more information.