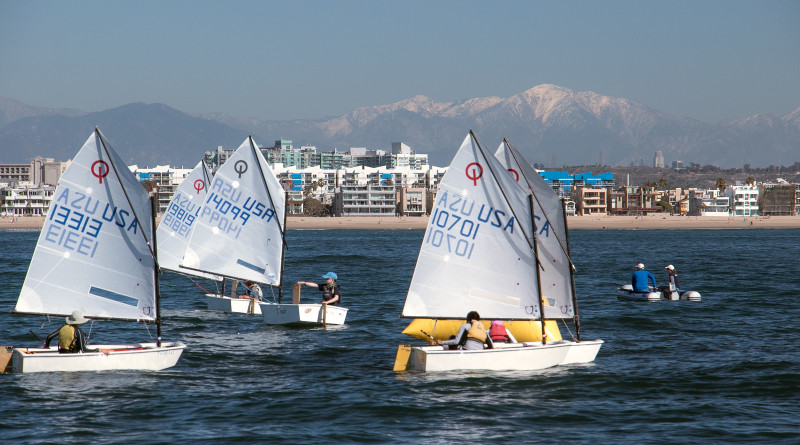 The 2016 Southern California Yachting Association’s (SCYA) Midwinter Regatta was held by participating clubs over the weekends of Feb. 13-14 and Feb. 20-21. The new two-weekend format for the 87th winter sailing tradition enabled host yacht clubs to select the best fit for racers wishing to participate in the regattas.

The Feb. 13-14 weekend of race results are provided below. To find out more about the 2016 Midwinter Regatta, visit midwinters.scyaweb.org or contact Jo Ann Sedgwick at service@scya.org.

Del Rey Yacht Club had more than 70 boats signed up to race the first weekend of the regatta, which greeted racers with highs in the 70s and reasonable winds on day one. In the Opti Green Class the 33 boat fleet were dominated by four members from California Yacht Club.

Lucca Farrell won the class with 39 points in eight races. Matthew Commons was second, with Lucas Knight and Harry Bryan coming in third and fourth.

In the 44 Boat Champs Fleet 1 point was the difference between first and second place with Ryan Satterberg of Santa Barbara Yacht Club taking line honors over Jake Maol of Bahia Corinthian Yacht Club.

Dana West Yacht Club hosted two PHRF non-spinnaker classes. The sailors were put to the test with an array of weather conditions on Feb. 13. The wind varied from nothing to 15 knots with mild seas. Temperatures inland were setting records yet on the water things remained brisk.

Five boats competed for honors in the A Class with Masquerade, an Olson 30, taking first place with three bullets in three races. Grey Goose another Olson 30 took second place in the competition.

In the B Fleet, Tekeela, a J22, beat out much larger boats to take first place in all three races. They were followed by Out of the Blue with 3 seconds.

Newport Harbor Yacht Club had near perfect conditions with clear skies and temperatures in the 70s for the 59 sailors that took part in this year’s Midwinter Regatta on Feb. 13. Sunday’s conditions could have been more favorable with a little more wind and a little less fog.

In the C2 Division, Marleigh Henehan of Mission Bay YC took first place in the 13-boat fleet after winning the tie competition over Thomas Nilsen of Bahia Corinthian YC.

San Diego Yacht Club hosted the SCYA Midwinters on Feb. 13-14 in the Coronado Roads off of Point Loma. Over the two days, J/70s, J/80s, J/120s and Beneteau 36.7s participated in five races. The weather was ideal- sunny and mid-70s with above average speeds of 14-15 knots at the start of the first race on Saturday. After that, the winds remained steady at around 8-10 knots on Saturday late afternoon and early Sunday afternoon. On Sunday late afternoon, the winds died down tremendously at the end of the second race causing the race committee to shorten the course.

Silver Gate Yacht Club in San Diego is hosting multiple regattas for the Midwinters with the V32 remote control fleet having completed their races under sunny and clear skies with temperatures in the low 80s on Feb.13. The day featured 10 races with 18 boats competing. Only 3 points separated first and third place in a hotly contested contest.

Radio Controlled Sailboats are becoming more and more popular in the SCYA Midwinter Regatta. Eight VO 70 RC boats were entered for the 87th SCYA Midwinter Regatta that raced at Newport Dunes. The sailors all gathered for the noon start at Newport Dune and 11 races were conducted. The winds were wonderful and the competition was intense as the skippers all tuned their boats between races to maximize their chances of winning an SCYA trophy.

First place was awarded to Steve Beck; Second place went to Larry Grant, who acted as the event coordinator. Third and fourth places went to Mike Schachter and Mike McCarthy, respectively. SCYA Vice Commodore Simon Dekker was present to award trophies and watch the action. Steve Ford is the builder of the boats and allowed people to try their luck at sailing extra boats he brought along so that future sailors could see what it was like to sail a radio controlled VO 70.