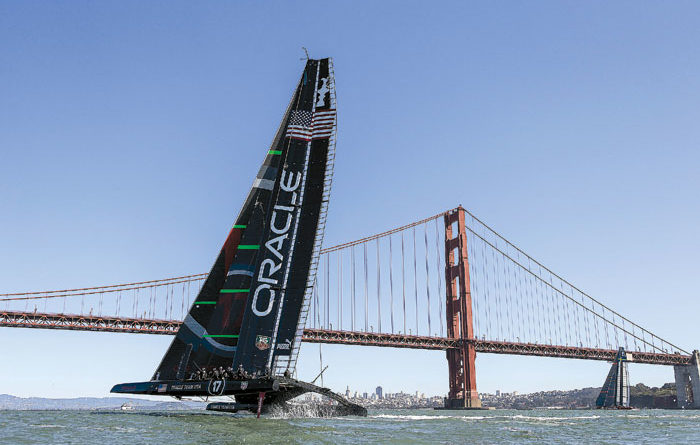 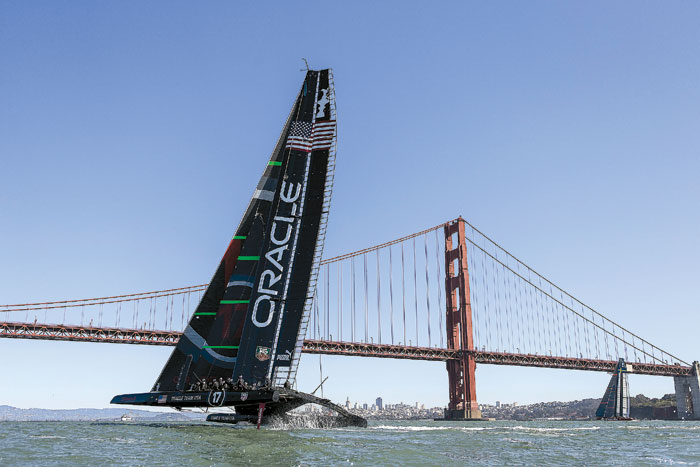 Skipper Jimmy Spithill said it was a “fantastic” day in about 10-12 knots of wind.

“I tell you what, mate, I’ve been looking forward to this day for a long time,” the Australian said by phone from Oracle’s base in San Francisco. “For the boat to perform like it did lifts a weight off the shoulders, to be honest. It’s good to be back on the horse again.”

The renewed Oracle sailed for about three hours Feb. 4 with a full crew of sailors plus some engineers, before sea trials began in earnest. “It really was one of the best days we’ve had in a long time,” said Spithill, an Australian who skippered Oracle to a two-race sweep of Alinghi of Switzerland three years ago off Valencia, Spain, to bring the oldest trophy in international sports to San Francisco.

“Essentially, we launched a new boat,” he explained. “We made a lot of modifications, so we were all a bit anxious because you don’t know how long it takes to get a boat like this up to speed. You can tell it’s an improvement, no doubt about it.

The boat capsized on Oct. 16, tumbling stern over bow. It was caught in a strong ebb tide and swept more than 4 miles past the Golden Gate Bridge. The high-tech, 131-foot wing sail was destroyed.

No sailors were injured.

Oracle had to wait for a new wing sail to arrive by ship from New Zealand before it could sail again.

Spithill said there was some apprehension about taking the big, powerful boat back onto the water, “but at the end of the day there were a lot of smiles at the base.”

Spithill and syndicate CEO Russell Coutts, a four-time America’s Cup winner, don’t think the capsize will be a big setback.

“We have to be careful to not do too much,” Spithill said. “It’s not who sails the most, it’s who gets it right, with quality and efficiency. People remember who holds the trophy, not who sailed the most days.”

“Provided we don’t get another setback like that, we’ll be in good shape,” Coutts said.

Oracle is building another boat at its San Francisco base and is having another wing sail built in New Zealand. The syndicate hopes to rebuild the wing that was destroyed in the capsize.

Coutts and Spithill said there’s still the possibility for mayhem in the big boats, but that the syndicate learned from the capsize.

“We responded to the capsize about as poorly as we could,” Coutts said. “There were a number of mistakes that caused much more significant damage. We should never have ended up outside the bridge, for example, in the big waves. There were a series of mistakes that led to that. I think it’s unlikely we’d have that much damage again. We’ll be better prepared if something happens. By the same token, we could get a rigging failure and the wing could catastrophically break as well.”

The wing sail looks and acts like an airplane wing, improving the yacht’s speed and maneuverability. The wing sails on the AC72s are an offshoot of the radical 223-foot wing sail that powered Oracle’s giant trimaran to victory over Alinghi in 2010.

“I think it will be fun for the people of San Francisco to see the boat out on the water,” Spithill said. “It will start to rev the city up again.”