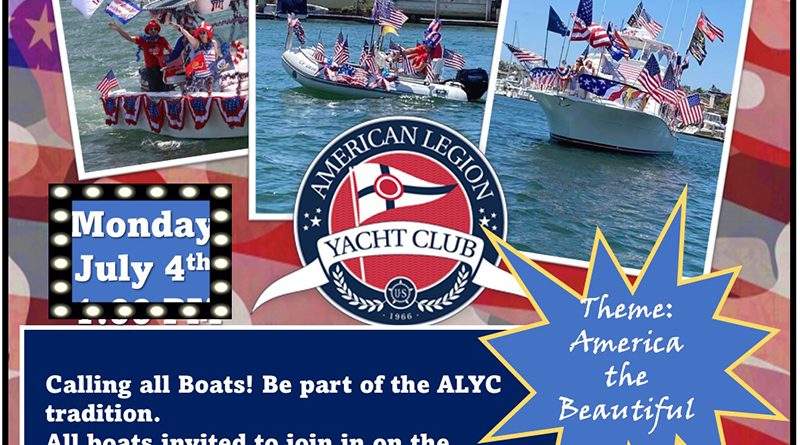 The parade will begin at 1 p.m. off the east end of Lido Islands and follow a course throughout the harbor. Image courtesy of ALYC

Boaters are welcome to decorate their vessels to the theme of “America the Beautiful” and join the yacht club at 1 p.m. off the east end of Lido Island. Participants will compete for class awards like Best Decorated, Finest Costumes, Most Creative, and the Commodore’s Award; class winners will be announced at an awards banquet on July 17.

“We are encouraging local boaters to join us for the parade,” said Commodore Tommy Wheeler in a May 27 press release from ALYC.

“It’s a lot of fun, and a very fulfilling event to see the community appreciate the effort to decorate your boat and celebrate our nation’s independence in style. For the general public, we hope you include the parade as part of your day. It’s a can’t miss opportunity to celebrate with your friends and family.”

The parade will be led by ALYC club boat Valor with the Newport Beach Chamber of Commerce serving as Grand Marshal, followed by VIP boats filled with active-duty service members and veterans.

The parade is celebrating almost 50 years in Newport, starting as a casual event in the 1950s as the Character Boat Parade.

The Newport Harbor Chamber of Commerce took over the helm, and over the years, has changed the theme and built the event into a grand parade known as California’s largest, longest-running, patriotic boat parades.

The event is sponsored by the ALYC and can be viewed from public beaches, docks, and boardwalks throughout Newport Harbor. Registration for the event is free and can be found online through the ALYC website at www.alyc.com.