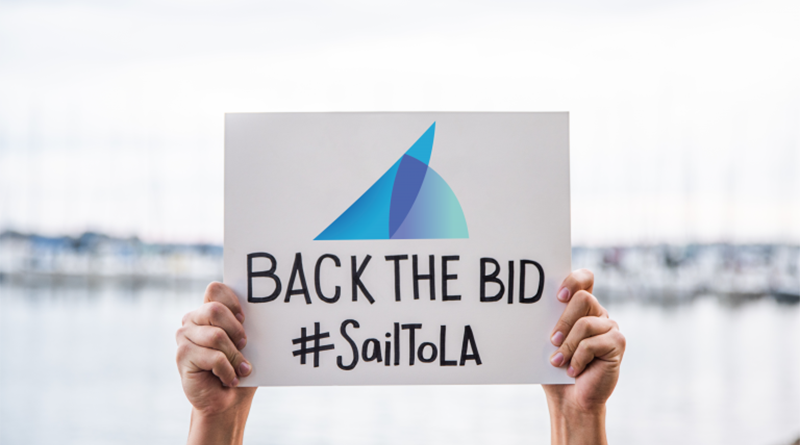 Back the Bid # SailtoLA is a social media campaign launched in late October supporting the reinstatement of Para sailing in the 2028 Paralympics. US Sailing Photo.

LOS ANGELES一 World Sailing kicked off a campaign to reinstate sailing in the 2028 Paralympic Games held in Los Angeles.

The organization has outlined strategic priorities to increase participation worldwide by 2023 and meet the standards set by the International Paralympic Committee to place a bid.

By 2023 World Sailing is hoping to increase worldwide participation to 45 nations on six continents; increase youth participation (below the age of 30) to 20 percent of total athletes; grow the number of female participants to 30 percent, and, ultimately, achieve gender parity.

Part of the campaign is a social media push, ‘Back the Bid’ #SailtoLA, which has gained traction on social media with prominent sailors posting photos of themselves holding signs that say Back the Bid #SailtoLA to show their support for the sport to be reinstated to the games.

World Sailing placed a reinstatement bid for Paris 2024 but was turned down by the IPC after the committee chose to keep the program from Tokyo 2020.

The IPC has yet to confirm the bid process for Los Angeles 2028, but World Sailing said they would continue to proactively work on its campaign to build support for Para sailing worldwide.

At the Hansa World Championships Oct. 2-9, 181 Para sailors represented 23 nationals from six continents. Over the past five years, the number of nations participating in Para sailing has increased by 30 percent, according to World Sailing.

There are 750 Para sailors registered with World Sailing as of 2021, with 15 percent under the age of 30 and women making 20 percent of all registered Para sailors.

“We know that other major sports looking for reinstatement are already drawing up their bid plans,” said David Graham, CEO of World Sailing, in an Oct. 26 press release. “We know that IPC President, Andrew Parsons, has already publicly declared that the IPC will be looking at potential ‘new sports’ following the successful introduction of new, youth-focused sports at Tokyo 2020. We are on track to achieve our strategic priorities by 2023, and we are taking nothing for granted.”

To learn more or Back the Bid, see the World Sailing Facebook page at https://www.facebook.com/worldsailingofficial.