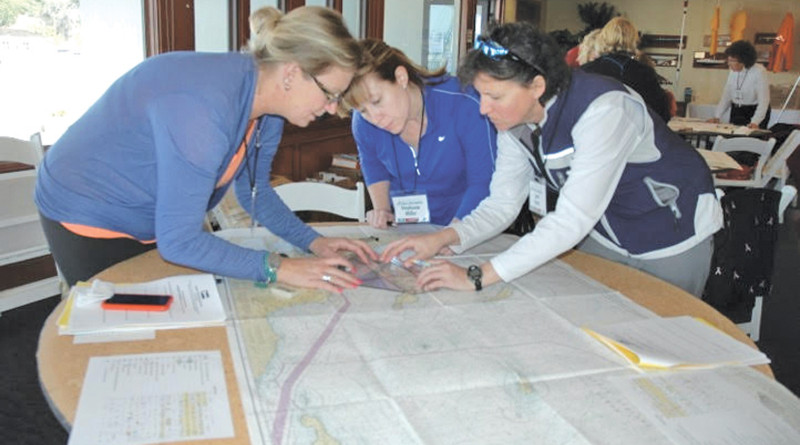 The women-only boating conference has come a long way since it first began in 1989.

The first convention of this kind began in 1989. Gail Hine of the Southern California Yachting Association (SCYA) started with organizing workshops on sailing single-handed (the moment when a boating partner unexpectedly becomes injured or sick and suddenly a woman assumes command of the vessel). This topic was “the nucleus of the workshops that followed and generated others that were not available [at the time] in the regular maritime marketplace,” Hine stated.

Hine wanted to ensure women had information that was not offered out there. Today such classes are being offered by Power Squadron or the Coast Guard Auxiliary and are called “Suddenly In-Command.”

The first three women’s sailing conventions organized by Hine were held at Cabrillo Beach Yacht Club in San Pedro. It started out casual with attendees bringing boxed lunches, being taken out on a boat for a lesson and then being provided with a short program afterwards. Since then it has grown to more than 200 attendees.

“Over the years, it has developed into a much more constructed event,” Hine stated.

There are in the range of 20 to 25 boats in which women are taken out for demonstrations and lessons.

The idea behind an all-female sailing convention is to empower women to handle a boat on their own. The intent of the workshops is to give women more confidence in their boating prowess. Women are less likely to feel intimidated to ask questions in all-female sessions with only female presenters. 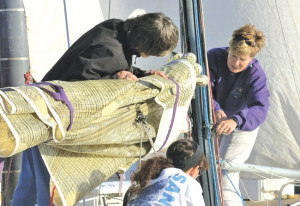 This women-only boating convention is an all-day event with 34 different workshops. The presenters are all women, with 48 percent of them being coast guard captains. All the instructors volunteer their time to share experiences and knowledge of boating with other women. They come from all over the country, with 25 of the women from 11 states (not including California). 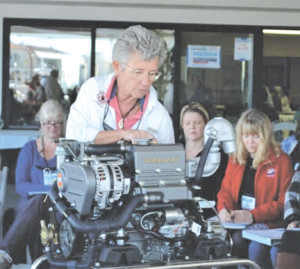 Attendees can choose from a wide range of topics with all levels of skill from novice to expert. Three new workshops being introduced this year are iPad Navigation, Emergency Equipment Demo as well as Rigging Basics and Damage Control. Those who register for the iPad Navigation workshop will receive a special email with the list of apps in advance, so they can come prepared with their iPad already loaded with the recommended applications.

The evening’s keynote speaker is Capt. Alison Osinski, a USCG 100-ton licensed captain. She also will be teaching the Marine Navigation and iPad Navigation workshops at this year’s convention. She has taught boat-handling skills, safety, navigation, coastal piloting and charting at past events as well. As a boat-delivery captain, Osinski takes groups out on day sailing expeditions, fishing trips, whale-watching excursions and sunset cruises. She is currently the principal-owner of Aquatic Consulting Services, located in Avalon, which specializes in aquatic risk management and aquatic facility design, management and operation.

This convention is not just about sailing but power boating as well. Many of the workshops apply across the board for both sailboats and powerboats. Topics applied to both sailors and power boaters include cruising, weather, galley, maintenance, night navigation, electrical and dinghies.

There is always something new to learn when it comes to boating, Hines pointed out. Not only with new technology, but the weather conditions are never quite the same with the wind and ocean always changing. It is also a sport that one never outgrows, according to Hine. Boaters can also do this sport with others or solo. Unlike other sports, boaters can be a co-ed team or all the same gender.

Registration for this convention is open until Feb. 1. As of Jan. 6, there were 150 women registered. Space is limited to approximately 220 attendees. More information about the workshops and registration can be found online at womenssailingconvention.com.