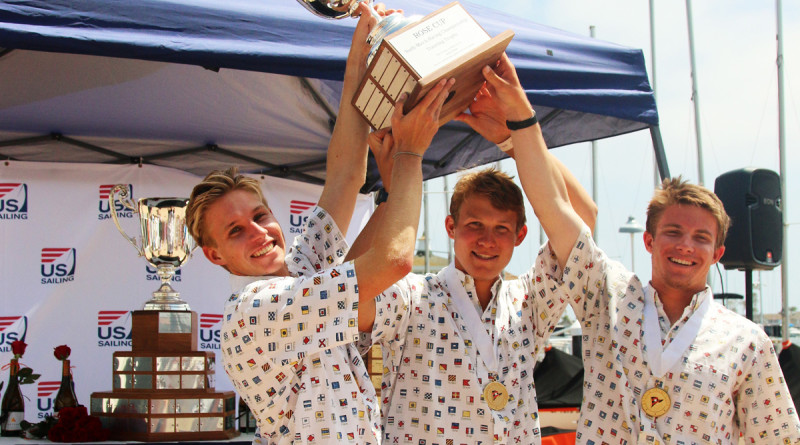 This year, it returned to the site of the inaugural 2010 event, begun by Balboa Yacht Club members and the Newport-Balboa Sailing and Seamanship Association (NBSSA).

The event began on Wednesday, June 17 with two days of clinics and practicing in the Gov Cup 21 boats under the direction of U.S. Sailing’s Match Racing representative Dave Perry.

“The winning team showed that hard work pays off and they are deserving champs,” said Perry.

On the last day of competition, the high hit 75 degrees with 8 to 10 knots of breeze. The teams went out to the race course starting at 10:30 a.m. after their morning briefing and participation in the Balboa YC Father’s Day brunch.

The first two wins in the finals between Killian’s team from Balboa YC and Sinks’ team from San Diego Yacht Club ended with Killian winning both races. In their first race, Sinks had a penalty at the start but was able to cross the line first. However, Killian was able to gain a lead going upwind and finish first. In his second start, Killian was forced to gybe at entry so Sinks was in control but then hit the pin so carried a penalty.

Christopher Weis from Del Rey Yacht Club and Nicholas Sertl from Rochester, New York, competed for third and fourth in the Petit Finals. In his first race on June 21, Weis was able to gain a large lead at the windward mark and win that race. Sertl had won the first race June 20. In the third race, Weis rounded the top mark with a big lead and was able to win, finishing in third.

Another important part of the regatta was the presentation of the Nick Scandone Sportsmanship Award, which was awarded to Colin Kennedy’s team with Alec Caterson and Austin Colpaert from Oakcliffe Sailing Center in Oyster Bay, New York. The award was voted on by all of the team members as well as the umpires who provide on-the-water decisions throughout the racing. Scandone, a longtime Balboa YC member, won the Paralympic Gold Medal in sailing at the 2008 Olympics in Beijing. He passed away in 2009 after struggling with Lou Gehrig’s disease (ALS).