NEWPORT BEACH — Christophe Killian was not yet born the last time a host club won a Governor’s Cup. Back then Jimmy Carter was president, The Empire Strikes Back was the top film at the box office, Magic Johnson was playing his rookie season with the Los Angeles Lakers and the Clippers called San Diego home. 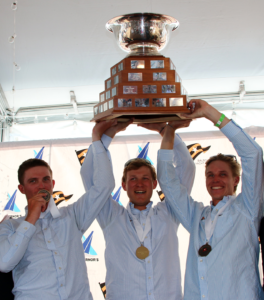 The victory was reportedly accomplished in front a record number of spectator boats looking on at Newport Beach Harbor, July 22.

Killian won the first race before Takahashi responded right back with a win of his own. The 20-year-old American, however, would win the next two races to claim the Governor’s Cup.

The Governor’s Cup is the world’s oldest youth regatta; it was held July 17-22 in Newport Beach.