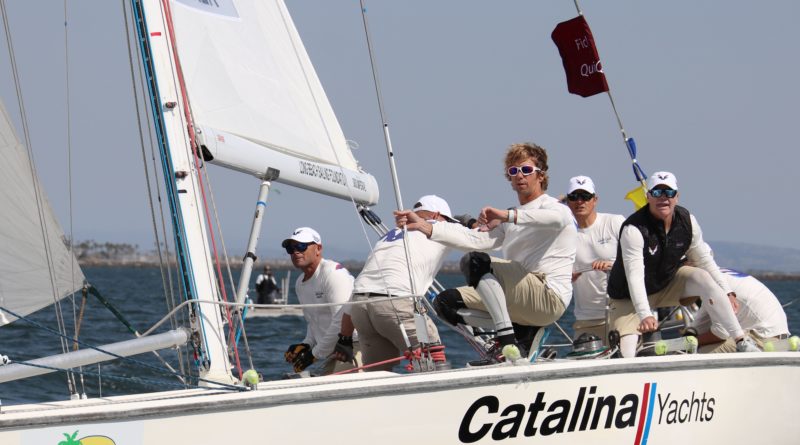 LONG BEACH — The 2018 Congressional Cup lineup is set, thanks to the first and second place finishes of Dean Barker and Johnie Berntsson at the Ficker Cup, held April 13-15 in Long Beach.

Berntsson (Sweden) also qualified for the Congressional Cup with his second place finished at the Ficker Cup, a three-day regatta hosted by Long Beach Yacht Club at the racecourse off Belmont Veterans Memorial Pier.

The regatta featured breezes varying from six to 11 knots, two days of sunshine and hazy conditions at the finish.

Competition opened with the first of Round Robin racing on April 13. Dave Hood (United States) handed Barker his only loss of the regatta on opening day. Barker, however, finished in the lead after the second Round Robin; Berntsson, Chris Poole (United States) and Leonard Takahashi (Japan) joined Barker in the semifinals.

Barker eliminated Takahashi in the semifinal round to set up a final match against Berntsson (who defeated Poole), with the former coming out ahead as the first place finisher.

Berntsson – despite finishing in second – will make his tenth Congressional Cup appearance; he also finished in second place last year and won the Crimson Blazer in 2009.

Ficker Cup, a match-racing event featuring one-design Catalina 37 yachts, was founded in 1980 in honor of Bill Ficker, a yachtsman who helmed Intrepid to victory in the 1970 America’s Cup. Ficker also won the 1974 Congressional Cup.