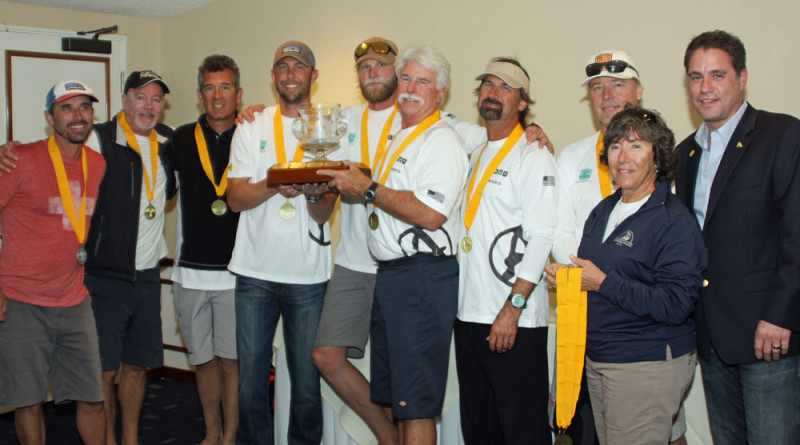 LONG BEACH — On a weekend that ran the gamut of wispy breeze to gale force warnings, Will “Bill” Durant and his Long Beach Yacht Club team won the 2015 Butler Cup match race Nov. 15. The team competed in the Long Beach Sailing Foundation’s Catalina 37s in the regatta hosted by Long Beach YC.

With Durant were six other skippers: Michael Anderson-Mittering of Newport Harbor YC; Shane Young of Long Beach YC; Dave Hood of Long Beach YC; Wendy Corzine of Long Beach YC; Alex Steele of Balboa YC; and, Paul Turang of Transpac YC. They saw the breeze change from as little as 4 to 6 knots at the start on Nov. 14 to gusts of more than 20 on Nov. 15 as a storm front moved through Southern California.

Only 11 of the scheduled 14 flights were completed as the race committee deciding to abandon racing Nov. 15 due to ever-increasing breeze. At that point the skipper’s performance in Saturday’s light air suddenly became very important.

“The light air made the game different for everybody,” Durant said. “I think that all of the teams worked quickly on improving their light air sailing skills.”

When asked about Sunday’s conditions Durant smiled and said, “We definitely had extreme conditions both days.”

Finishing in second place on a tiebreaker was Anderson-Mittering.

“Saturday’s competition was all about keeping speed and positioning, but Sunday was definitely all about match racing,” Anderson-Mittering said. “My hat’s off to Bill and his team. When the breeze came up we had a great race with Bill and a fight to the finish.”

The event is named for Frank Butler, founder of Catalina Yachts, who in 1990 designed, built and donated the 11 Catalina 37s used for all the match races held at Long Beach YC.