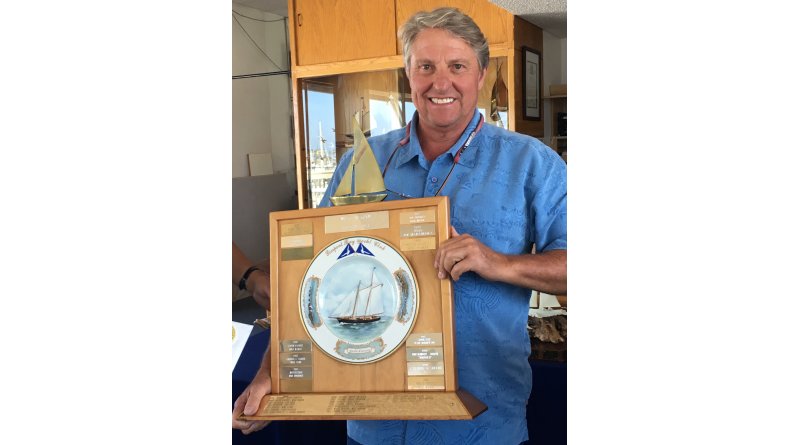 Larry Spencer, skipper of the Olson 30 Blue Star, held the perpetual trophy for the PHRF boat with the lowest corrected time in the 42-nautical-mile Milt Ingram Trophy Race. The trophy was donated by Milt’s daughter Blanche and depicts the famous yacht America.

VENTURA — Pierpoint Bay Yacht Club hosted what is known as “the largest sailboat race in Ventura County” on July 8-10.

The Milt Ingram Trophy Race, or Milt’s Race, is part of Santa Barbara Yacht Club’s Wilson Series and the Ventura Sailing Club’s beach cat series bringing sailors to Ventura from as close as Oxnard and Channel Islands to as far as Arizona.

Racing kicked off at 11 a.m. on July 9 with participants racing on the 42-nautical-mile course from the Mandalay buoy to Anacapa Island, finishing in the Ventura Harbor entrance channel. The day ended with a complimentary after-race dinner. On July 10, sailors began their day with a champagne breakfast before heading out on the water. A trophy presentation took place later that night.