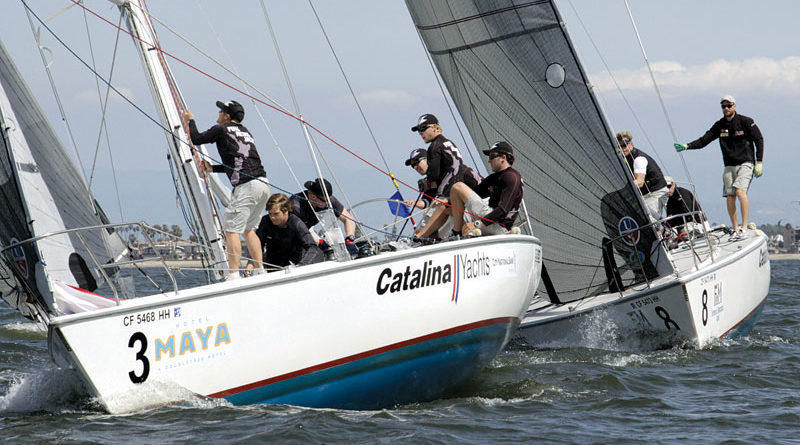 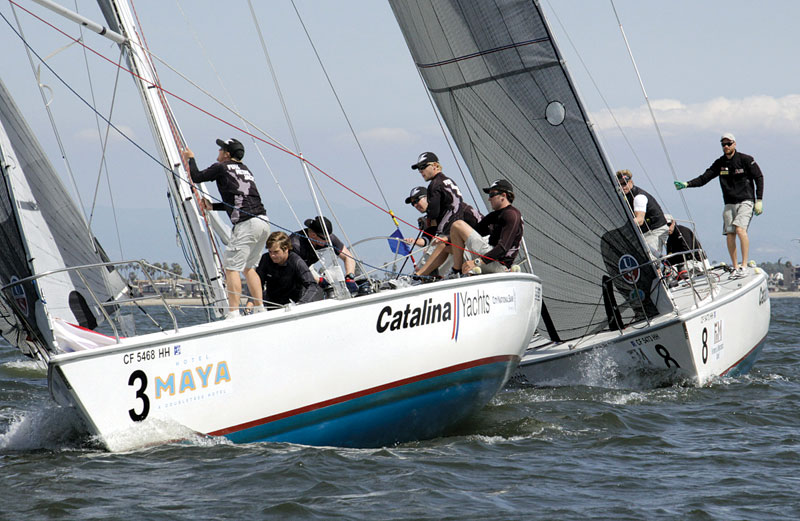 LONG BEACH — Drama? Suspense? Intensity? Long Beach Yacht Club’s 48th Congressional Cup had it all on the final day. Ian Williams of Great Britain pulled off a memorable win over Gavin Brady of New Zealand in the decisive final race March 28, as the sun set into a murky cloud bank.

After Williams, the defending champion, had won the first race of their championship final by 9 seconds and four-time winner Brady claimed the second by 8 seconds, Williams’ Team GAC Pindar led all the way in the third, but he had a problem: a pre-start penalty that he had to erase before the finish.

“We had to do that penalty (turn),” he said — but was he far enough in front to execute a 270-degree semicircle without Brady taking the lead?

At the dock, Williams recalled with an ironic smile that “our team was discussing just this morning how we’d never seen anybody win with a penalty. The rule of thumb is when you can do it and come out still ahead. Gavin pressed really hard.”

The key moment came about halfway up the second windward leg. Williams, who led Brady by 15 seconds at the leeward mark, was crossing him on port tack when, instead of tacking to starboard, he turned down across his onrushing foe and came up still in front on starboard tack — a 270-degree turn that absolved him of his penalty.

“We knew it was coming,” Brady said. “It was probably the right place to do it. We were just too far behind to do anything about it.”
But it wasn’t over yet. The move cost Williams most of his lead, and they rounded the last mark stern to bow. But Williams didn’t give another inch before crossing the finish line 9 seconds in front — his 16th win in his last 17 races, after Brady stopped his 15-match winning streak.

Earlier, in agonizingly light-wind semifinals, Williams had disposed of Taylor Canfield of the U.S. Virgin Islands, 2-0, while Brady won a fiery 2-1 decision over Italy’s Simone Ferrarese, who chose to carry a pre-start penalty all the way to the finish.

The difference for Brady that time was that, after they split the first two races, he never gave Ferrarese room to do a penalty turn without surrendering the lead. At the line, Ferrarese drew a penalty from Brady to cancel out his penalty — but Brady crossed the line three seconds in front.

There was an hour’s delay when the wind turned off before returning at a steady 10 knots.

Brady, who sails as a hired skipper these days, said later, “It’s good to compete with the best match racers in the world … I think we competed well. I love doing the Congressional Cup. It’s been the backbone of my career.”

He would like to make a career of match racing, “but we need a sponsor,” he said.

Asked what he would do with a second crimson blazer, he said, “It’s good to win two in a row. To be able to do it against someone like Gavin really means something. I’m still a couple behind him.”

In the fleet race for non-sailoff qualifiers, Will Tiller of New Zealand finished far ahead but was disqualified for crossing the start line early, leaving countryman Laurie Jury to collect the $1,000 prize.