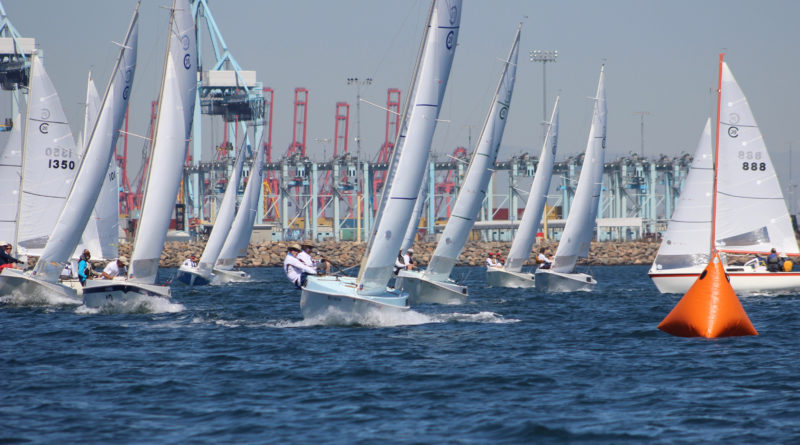 SAN PEDRO ― The California 20 was a boat in demand in the 1960s, but production on the popular sailboat halted in 1975 for reasons unknown. Cal 20s are still popular today despite being out of production and were on full display during a recent sailing event in San Pedro.

Alamitos Bay Yacht Club Commodore Chuck Clay, who won the championship in the past, hoped to win it all this year but finished in second place; he also placed second in 2016.

“It’s always hard to lose it after winning all the way down to the last race,” Clay told The Log. “But Keith [Ives] sailed well, and he’s a good sailor.” 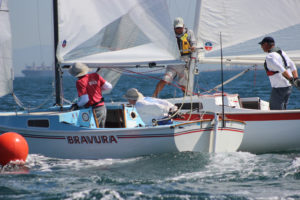 Clay said after coming across some waves, Ives took the lead. Ives ended up in first place his second year in a row.

The winds were steady for the first couple days of the race kicking up a bit towards the end of the second day. The winds took the championship up a notch on the final race day.

“Sunday started out at about 10 knots and got up to 13-14 knots,” Clay mentioned. “There was a lot of kelp. We caught kelp, and everybody got kelp which was very frustrating.”

The simple design of the Cal 20 makes this boat easy to rig and a breeze to sail. The boat’s design, which fits a two to three-person crew, provides sailing with comfort and ease.

C. William Lapworth designed the Cal 20 in 1960. The fiberglass sailboats were built at Jensen Marine Factory in Costa Mesa. Jensen Marine was bought out by Bangor Punta in 1965, and the factory relocated to Tampa Florida in 1981 and then relocated again to Massachusetts.

The production of Cal boats ceased all together in 1989.

“The Cal 20 is a great boat for One Design sailing,” Clay stated.

Stephen Ashley also competed in the three-day race and agreed with Clay.

“One great thing about doing a One Design fleet is it’s really easy to figure out how you are doing [during the race],” Ashley said.  “With the Cal 20, it’s simple. If a guy is ahead of you, you’re losing. If a guy is behind you, you’re winning. That’s one of the things that make it fun.

“Chuck’s one of the best,” Ashley added. “They’re hard boats to do really well in because you have got to be right on your game to sail against someone of his caliber.”

Clay mentioned the Cal 20 is very affordable compared to other sailboats of this size.

One doesn’t necessarily need to own a Cal 20, however, to enjoy the sailboat.

Ashley teaches sailing classes on the Cal 20s in Long Beach. He is a member of Shoreline Yacht Club, trustee of a Cal 20, and treasurer of the SYC Sailing Foundation as well as an instructor.

The SYC Sailing Foundation is a 501(c)3 charitable organization and maintains a fleet of Cal 20s.

The boats are kept at the slips in front of Shoreline Yacht Club. The yacht club offers a place to teach sailing students in a classroom setting for the first day, and the harbor is where the students sail for the rest of the lessons.

Anyone can take the seasonal classes offered May through September even without a yacht club membership. Students can continue to charter the boats on a quarterly basis based on availability at a reasonable cost following the class and after passing a safety and skipper test.

One may not need to own or partially own a Cal 20 to compete in future regattas either.

Currently, the rules and regulations for Cal 20 competitions require the skipper to have at least one third ownership of the boat.

Ashley said the idea behind the ownership rule is to have people racing the boats who have an interest in the boats.

“We want people who are invested in the boats and have a long term investment in the program,” Ashley stated. “The downside [to the ownership rule] is that the group keeps getting older every year, and there are not a lot of new sailors coming into Cal 20s at the ownership level.”

Amending the bylaws to allow for more participation in Cal 20 regattas are currently being considered.

“Times have changed and participation is down,” Clay said. “So we’ve got to go with the changes to keep the class alive.”