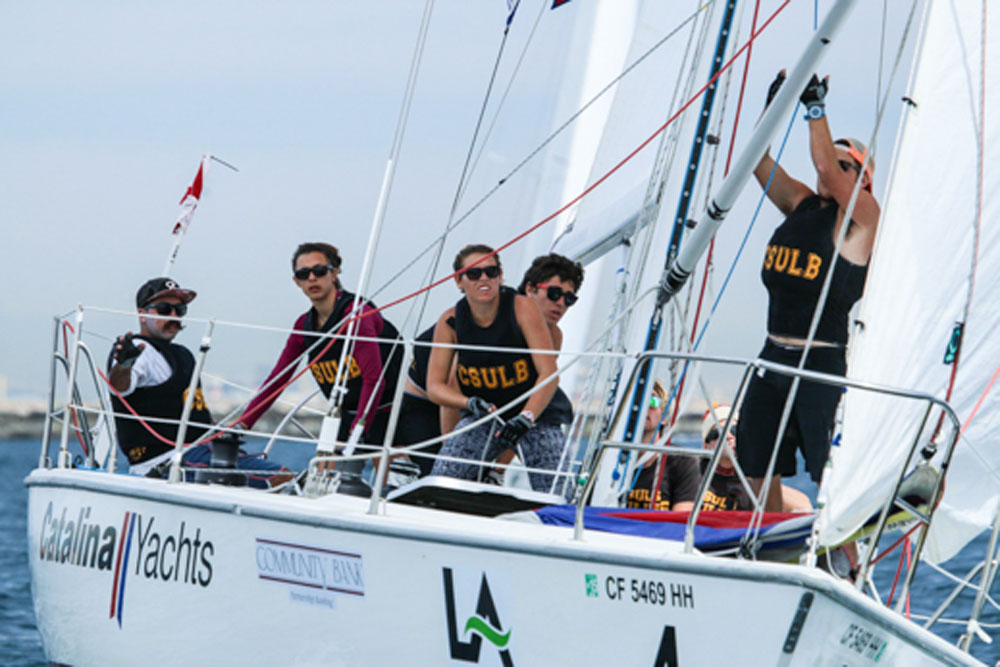 The annual event, in its eighth year, is organized and hosted by Los Angeles Yacht Club and raced aboard an equalized fleet of Catalina 37s. An intercollegiate invitational big boat regatta, the competition brings together 10 of the top sailing teams from around the nation.

California Maritime Academy has dominated the series the past four years. But in Race One, on the first day of Harbor Cup 2015, the U.S. Naval Academy Offshore Sailing Team led the fleet from pole to pole on a twice-around course. Race Two went to College of Charleston, a rival school that had charged on the scene three years ago, coming in second overall in its inaugural year and winning the sportsmanship award.

The caliber of competition at Harbor Cup remained elite—over the course of the weekend, six different teams would earn at least one bullet. It’s a regatta many plan for year-round; Charleston coach Ned Goss says his team, “prepares all year long, and looks forward to.”

In fact, skipper Jay Greenfield revealed, “We started the team pretty much for this regatta. We didn’t have an offshore team, so we put one together and the school said ‘Go for it!’ It’s a really well run regatta, and really competitive.”

In Race Three of that first day, Cal Maritime logged a solid win in a three-lap course and the day ended with Cal Maritime in first—but Charleston and Navy nipping at its heels.

The leaderboard remained volatile over the next two days – with USC Trojans, Mass Maritime Buccaneers and CSU Long Beach 49ers all capturing wins, and keeping each other on their toes.

Five races were held Saturday, March 14, and when the dust settled Cal Maritime clung to a one-point lead over Charleston, while USC had a slim advantage over Navy in third and fourth respectively.

Meanwhile the students—half from cooler climes—enjoyed the unseasonably warm weather and fine breezes of Southern California. Mass Maritime skipper Priscilla Stoll admitted she and her team were “a little rusty” after extreme weather conditions at home kept the crew off the water all winter. The co-eds enjoyed all the more the warm sunshine, pods of dolphin and Gray whales; and on Saturday, when races were briefly postponed, several even went swimming.

Shoreside activities at Los Angeles YC included dinners, accommodations and a one-two punch of superstar speakers: Dawn Riley and Gary Jobson. Riley is past president of the Women’s Sports Foundation and currently executive director of Oakcliff Sailing Center, and has competed in three America’s Cup campaigns and two Whitbread Round the World races (now known as the Volvo Ocean Race). Jobson is a world class champion sailor, past president of U.S. Sailing, writer/author and popular television commentator for ESPN and the America’s Cup. He wowed the crowd with films and anecdotes.

The final day of the regatta was a thriller, with stunning wins by Navy and Mass. Maritime, and a near-upset at the top tier. Cal Maritime rebuked nine challengers from around the nation to capture the title for the fifth year in a row, beneath partly cloudy skies.

“The team did great,” said Chris Vilicich, Cal Maritime skipper. “Our boat handling was almost perfect and we made very few mistakes. I was super happy and very proud of them.”

Defending Cal Maritime’s four-year winning streak put “a ton of pressure” on the team, he added. “I’ve been super-nervous the past two weeks— but now that it’s finally over I’m relieved.”

The Port of Los Angeles Harbor Cup was initiated in 2008, and is organized and hosted by Los Angeles YC—a leading fixture in West Coast boating since 1901. Originally founded as the South Coast Yacht Club, it later incorporated Sunset Yacht Club and the Los Angeles Motor Boat Club, moving to San Pedro in the 1930s. It was described at the time as a “heterogeneous group of sailors, power boatsmen with their naphtha launches, and sailing dory enthusiasts, but not without a number of larger schooners and fairly fast sloops.”

Harbor Cup races are held in the Pacific Ocean outside the harbor breakwater and iconic Angels Gate Lighthouse, beneath the Pt. Fermin landmark, with the impressive Port of Los Angeles as a backdrop. The port encompasses 7,500 acres and can accommodate 270 vessels with 86 towering cranes, including the new post-Panamax vessels. In addition, the harbor boasts 3,800 recreational slips and the World Cruise Center at Ports O’ Call, amidst its 43 miles of waterfront.