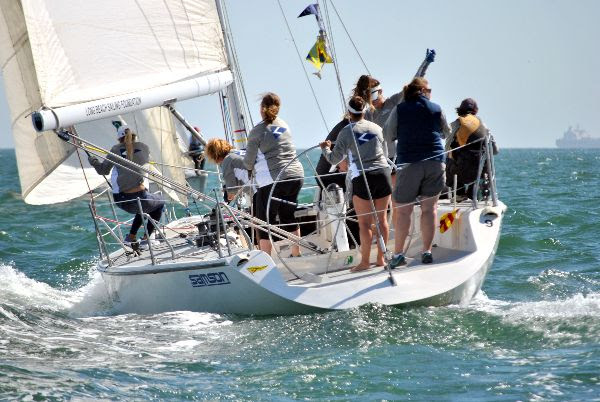 Newport Harbor Yacht Club’s Casey Hogan finished third in the LEMWOD regatta, which was held in Long Beach, Oct. 11-13, and hosted by Long Beach Yacht Club. Blecher finished the one-design (Catalina 37) regatta with 22 points, followed by Hjorth with 24 and Hogan with 29.

“We had some ups and downs today; tried to make things harder on ourselves, but in the end, the team as a whole made it work. Thankfully, our team is solid – you can’t win without your team – and uniquely for Marina del Rey, we really shine in a stronger breeze,” Belcher said after the race, in a released statement.

This year’s regatta also featured a Cal 20 Class race; a trophy was was awarded to the yacht club with best results in both Catalina 37 and Cal 20 classes. San Francisco Yacht Club was the winner of the joint trophy.

Cal 20s are cared for and managed by Shoreline Yacht Club.

The regatta’s start was slightly delayed due to weather; racing initially started with only 6 knots of winds, according to LEMWOD staff. The breeze picked up during the final race.

Belcher won a $1,000 prize for her first place finish; she will decided where the prize money would be directed. The prize money, per qualifying standards, must be directed to a scholarship fund of the winner’s choosing.

Long Beach Women’s Sailing Association sponsored the regatta. LEMWOD is named after Linda Elias, one of the most successful women sailors in Southern California. She died in 2003 after a battle with cancer; she was 52 when she passed away. Elias was the winner of the Peggy Slater Yachtswoman of the Year Award, raced in the 1989, 1991, 1993 and 1999 Transpac races and one the Women’s One-Design Challenge in 1992, 1994 a