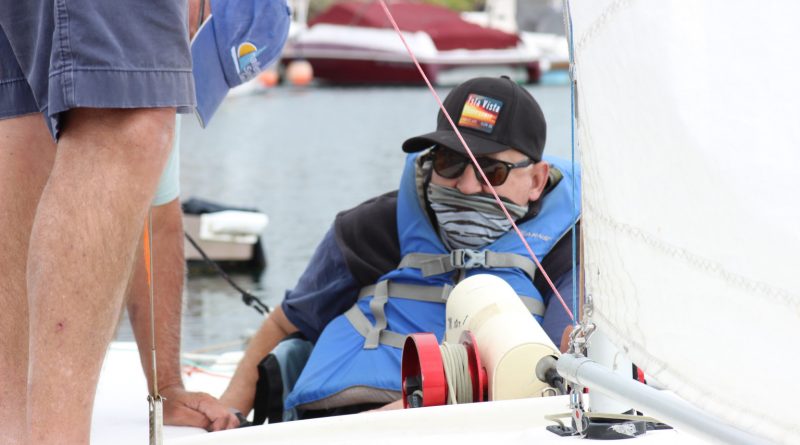 CORONADO一 Gray skies and a crisp breeze couldn’t damper the spirits of a group of sailors and volunteers at the seventh annual Kyle C. McArthur Memorial Regatta hosted by Challenged Sailors San Diego.

Racers bundled up in jackets and sweaters grouped together under a white canopy in the courtyard of the Coronado Yacht Club on April 23 while waiting for Coronado Yacht Club coach Jon Rogers, a national and world champion sailor, to walk them through the courses for the next day’s race while passing out his best tips.

The regatta spanned three days of fundraising, coaching, and racing  at the Coronado Yacht Club in Glorietta Bay.

The memorial  kicked off with a coaching and open practice session with Rogers on the morning of April 23, followed by the actual race on April 24.

The race honors Naval Lieutenant Junior Grade Kyle C. McArthur, a Coronado native and avid racer, who passed away in a car accident in 2013.

Rogers spoke about the honor of coaching McArthur, saying that even at 11-years-old, he had a good grasp of sailing.

For the coaching session, Rogers propped a foldable white board up on a table in front of the racers and talked animatedly about the course and tips.

Roger told racers the key to Glorietta Bay was to stay in tune with your boat and the wind, one racer quipped that the others could just follow them to figure out which way the wind was blowing and was met with raucous laughter and a couple of quips back about famous last words.

Challenged Sailors San Diego racers have a unique set of challenges, many of them are in wheelchairs or have other physical disabilities that can make life more difficult but, you wouldn’t notice once they take to the water in their Martin 16s, Harbor 20s, or Hansa 303s.

After the coaching session, sailors were eager to get out on the water and test their skills with a series of practice starts and a shortened course for practice purposes.

Once down on the dock racers who were racing in Martin 16s were assigned a boat, and a companion to assist them. Martin 16s have a unique set up, all of the lines lead directly to a seat nestled in the middle of the boat to allow those with the ability to move their arms to maneuver the boat how they choose.

One of the Directors of Challenged Sailors San Diego Craig Dennis, explained the mechanics of the boat and showed off a device that is rigged to the boat and allows racers without mobility in their arms to maneuver the lines and the sails with just a joystick or depending on the severity of their mobility, a breathing tube that allows them to maneuver with just their breath.

For two hours, roughly ten boats were cutting through the water and around buoys with Rogers in a chase boat in the middle of the bay shouting out instructions to racers as they fixed their sails and adjusted for the wind pattern.

Back on the dock after the practice run, racers lamented over mechanical issues that needed to be fixed before the next day’s race and joked about prospects for the next day.

The overarching message from racers is that they are just like everyone else, they may have challenges but they are sailors and out on the water their challenges aren’t important.

“There is so much more history in the individual sailors for whom this has provided freedom,” said Carolyn Sherman, president of Challenged Sailors San Diego. “That’s how I really describe it…The freedom that they experience when they get out on these boats that they can sail themselves and be just like anyone else is… liberating.”

Steven Muse, a paraplegic racer with Challenged San Diego, and his wife Jennifer found a new lease on life through the sailing program. Muse said that he used to be an avid rock climber, going as far as ice climbing, before a car accident put him in a wheelchair.

“Rock climbing was my life, now sailing is,” said Muse.

Muse sailed with Jennifer in a Martin 16 during the practice and came in sixth place in the regatta with 37 points on the board.