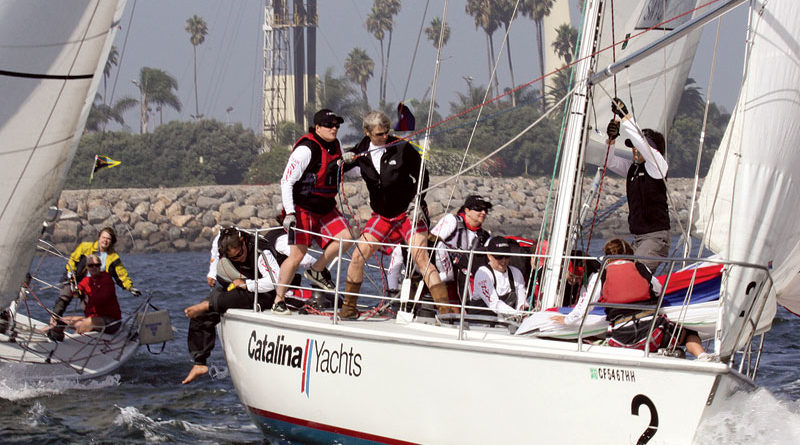 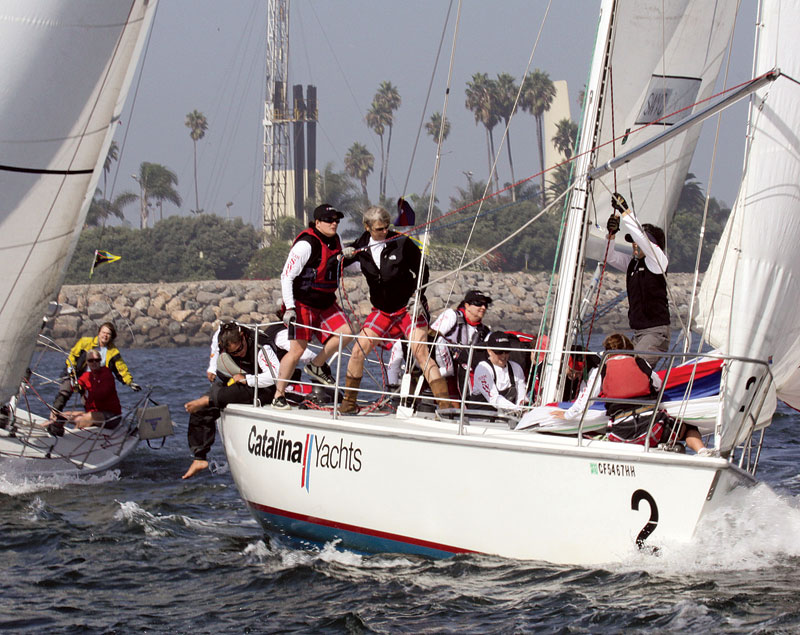 LONG BEACH — If anyone might have thought that Southwestern Yacht Club’s Colleen Cooke’s win in last year’s Linda Elias Memorial Women’s One-Design Challenge was luck or a fluke, she proved them wrong in dominating fashion Oct. 23 at the 20th anniversary edition of the event, hosted by Long Beach Yacht Club.

Eight all-women teams from throughout Southern California ran seven races over two days in the same boats and venue used for the legendary Congressional Cup.

Fog greeted the teams each morning, presenting a bigger challenge than limited visibility: light and unstable breeze. Both Saturday and Sunday, principal race officer Randy Smith postponed the first race of the day, waiting for a suitable breeze to settle in so racing could commence. The skies did clear — and when they did, the wind filled to 8 to 13 knots: ideal for the Catalina 37s used for this regatta.

Ahead by three points after the first day, Cooke had only to worry about second-place Casey Hogan’s Newport Harbor Yacht Club team and third-place Julie Mitchell’s San Diego Yacht Club crew.
“We knew we still needed to give it our all today,” Cooke said. “I really need to give credit to my whole team — but especially my tactician, Kris Zillman, who kept our heads on.

Newport Harbor YC’s Hogan took second place in the regatta, but she was really hoping to move into the top spot Sunday.

“The first race today was frustrating, with the light winds,” Hogan said. “We were hoping the race committee might wait longer before starting the race but …” she said, shrugging her shoulders. “We did, however, get a first in the last race, so it’s good to end on a high note.”

Hogan — who frequently races in Long Beach and is a regular California International Sailing Association coach, promoting youth sailing — offered her philosophy on sailing: “Sailboat racing is all about whoever makes the fewest mistakes.”

Third place honors at the regatta went to San Diego YC’s Mitchell, who gave credit to her tactician, Stacey Szabo, for consistent performance.

“We have the patience, because we sail in San Diego — where light breeze is common,” Mitchell said.

Mitchell commented on women’s regattas vs. men’s sailing competition: “In women’s regattas, all of the teams come together. We bond — and you’ll notice that teams will lend their crew to other teams, when needed. We help each other out — and that, I think, is the difference.”

The Women’s One-Design event began 20 years ago, and Linda Elias — the namesake for the current regatta — won the championship three of the first five years. Elias died in 2003, and the Long Beach/Los Angeles Women’s Sailing Association rededicated the event in her memory.