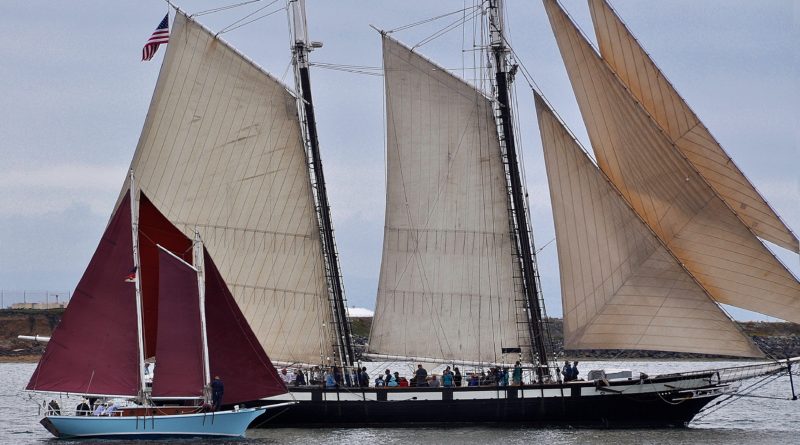 'Maid of Kent' (small boat in front of 'Californian') was the Class B Fleet winner at the 2018 America's Schooner Cup.

The race was organized into three handicap classes, but all 12 boats competed for the overall prize, winning the annual title to the America’s Schooner Cup.

San Diego had enjoyed full sun and steady wind most of the week, but the April 7 southwest wind puffed meekly midday to match the overcast sky with little promise of sunshine. The sun marginally broke through during the race but the lack of good wind plagued the slower boats all day.

Once around the last outer mark the sleek racing schooners disappeared back into the Bay while the heavy-bodied schooners continued their arduous beat to the mark for a lengthy time before any of them could head back inside to finish.

Fresh breezes continued to favor the faster boats that were first to round Buoy No. 3 and head back for the finish line. The winds, however, would falter again to further slow the last schooners driving up the bay, past Ballast Point and on up to Shelter Island. Still all 12 vessels completed the race within 3.5 hours elapsed time.

While light winds were abysmal for schooner racing, still magically no schooner ever had to short-tack while sailing either in or out of the narrow bay channel off Point Loma. The course provided great public vantage of the boats from Shelter Island as shown in prerace photos taken from the beach. Best yet, the event also raised record level funds again for NMCRS.

For more info on these schooners and this event visit www.americasschoonercup.com.