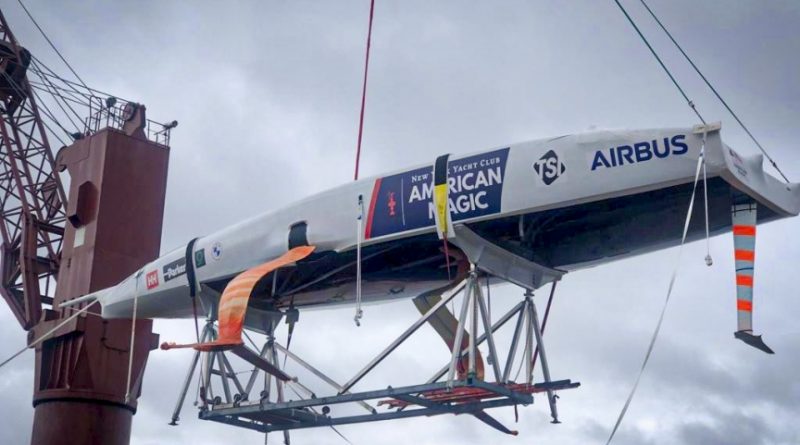 Racing yacht of American Magic leaves U.S. soil, but will the team be welcome in Auckland?

PENSACOLA, Florida—The racing yacht built for New York Yacht Club American Magic for next year’s America’s Cup race has left the United States. She was put onboard a commercial cargo ship and headed to Auckland, New Zealand, where she expects to race in the 2021 America’s Cup (among other events scheduled Down Under).

Questions remain, however, of whether the American Magic crew – and the racing yacht, Defiant – will be welcomed with opened arms once in Oceania’s second-most populous country.

“We can’t stay in Pensacola due to the approach of hurricane season,” American Magic Skipper and Executive Director Terry Hutchinson said on May 28. “From June 1st onwards the team is uninsurable in the panhandle of Florida. Shipping now, and getting to Auckland in June, will allow us to resume training on schedule.”

American Magic reported the team logged more than 70 percent of its on-the-water training on the Florida Gulf Coast, where Defiant was based for the winter. She left Pensacola for New Zealand on May 27.

Defiant hoped to leave Pensacola earlier, but the cancelation of sailing events due to the Covid-19 pandemic kept her on the Florida Gulf Coast through Memorial Day Weekend.

“The team ceased on-the-water operations to protect the health of team personnel, their families and the surrounding community in Pensacola. Fortunately, the team was able to make progress in areas such as design, production, maintenance, logistics and others,” American Magic staff said in a released statement.

Hutchinson said he and his team would be mindful and respectful of health issues upon arrival in New Zealand (which would coincide, roughly, with the publication of this issue).

“We fully understand and respect the caution and care that the government in New Zealand is showing in response to Covid-19,” Hutchinson said in a released statement. “When we are allowed to enter New Zealand, American Magic will of course adhere to all quarantine and health protocols and do whatever it takes to be responsible members of the community.”

American Magic was founded in New York City in 2017 and is an America’s Cup challenger. The team is headquartered at New York Yacht Club.

The team has a second AC75 boat; the name of the boat has not yet been revealed.

Defiant, meanwhile, will be based out of Wynyard Wharf in Auckland. The American Magic team announced they plan on sailing Defiant on Waitemata Harbor and Hauraki Gulf.