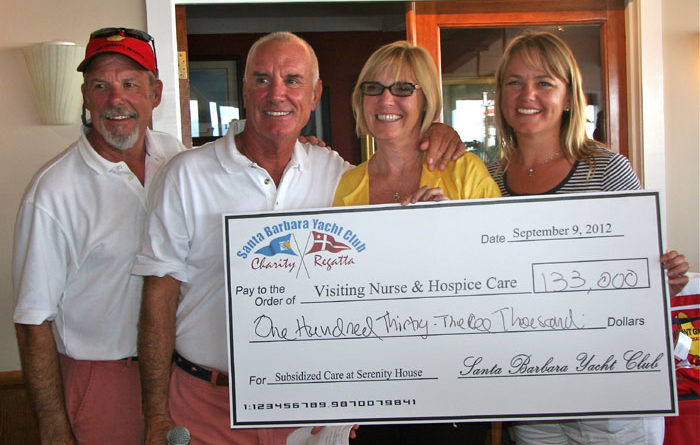 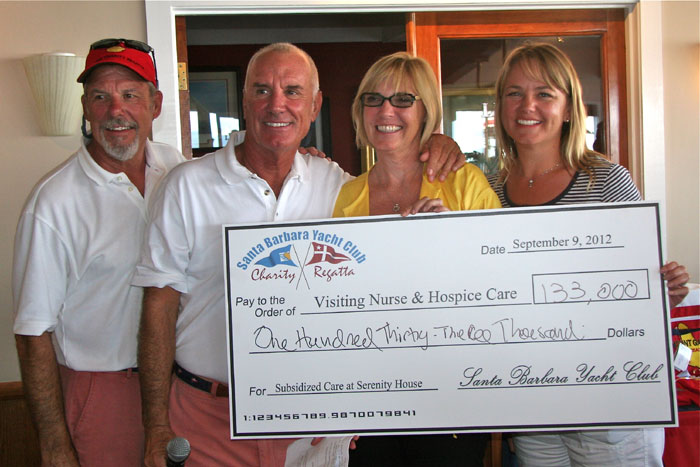 Hundreds of club members and guests watched the race from the clubhouse deck. By day’s end, the fundraiser had generated a whopping $130,000 to assist Serenity House and Santa Barbara Visiting Nurses and Hospice Care.

“It was fun to have each of the sailors at the helm as they sailed past their ship and received cheers from their shipmates on board,” Parker said. “It was a joy to see the smiles on their faces.”

Having volunteered in the past in support of this regatta, Parker said he felt it was his turn to take the helm for this year’s event.

“This yacht club has been very good to me — since I was 7 years old and first learned to sail in the youth summer sailing program, and all the years since,” Parker said. “I wanted to give something back to the club and my community.”

And give back they all did. To date, Santa Barbara YC has raised a total of $800,000 in support of Serenity House, and Santa Barbara Visiting Nurses and Hospice Care, during the regatta’s eight-year history.

In addition to the fundraising effort and camaraderie the annual charity race brings to the club and the sailing community, a key part of each year’s event is recognizing individuals who go “above and beyond” through their volunteering efforts, helping people in need. This year, Julie Kaufman was honored during the festivities for her contribution of 336 hours of volunteer work in support of Santa Barbara Visiting Nurses and Hospice Care, and Serenity House.

“The best moment of the day, for me, was honoring volunteer Julie Kaufman for her selfless work on behalf of our community,” Parker said.

With 80-degree weather, a good breeze and calm seas, two fleets of boats sailed the 5-mile course — all of them with Navy personnel on board. In PHRF Fleet A, finishing first out of a fleet of 10 was Blues Crews — a J/29 co-owned and sailed by Steve Williams, Jeff Robinson and Dave Baxter — finished first in PHRF Fleet A. Dirk Freeland’s Farr 40 Skian Dhu took second place, and Mark Nobel finished third aboard his J/105 Escapade.

While the sailing was fast-paced and fun, “This event isn’t really about racing,” Parker said. “It’s about a community coming together for a great cause.”

For more information on the race, visit sbyc.org.