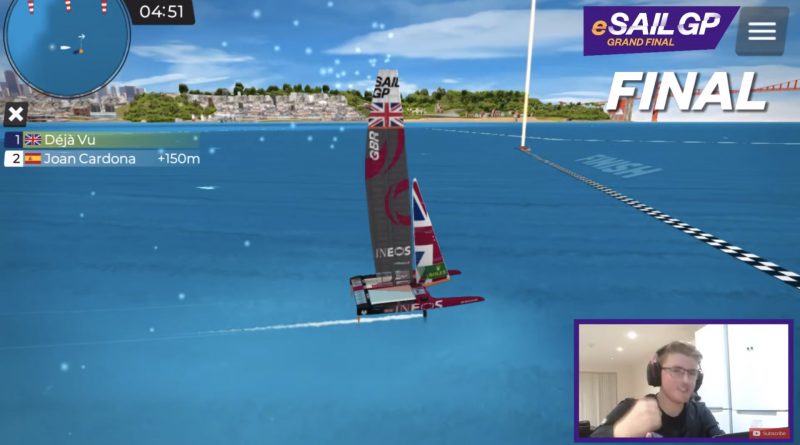 NEW YORK—Covid-19 has forced most of our worlds to go virtual: Zoom meetings, virtual office hours, online food orders and remote schooling. Add competitive sailing to the list of things now in the virtual world, thanks to Coronavirus and the Covid-19 pandemic.

SailGP events have been on hold this year, so the world’s best “eSailors” turned to their consoles and competed in the first-ever eSailGP Championship. The seven months of competition culminated in British eSailor Mike O’Donovan beating Spain SailGP Team member Joan Cardona to be the first eSailGP Final. Cardona was one of the pre-race favorites.

O’Donovan, with his victory, will have the opportunity to sail aboard an F50 in real life. He also qualifies for the eSailing World Championship Final.

Eight eSailors representing five countries competed in the eSailGP Grand Final. Each of the first three races had a different winner, but the two eSailors set to compete in a head-to-head matchup in the final race was determined by the finishing positions of the last fleet race.

Cardona won the first position, with O’Donovan finishing second in the last fleet race – setting up a head-to-head matchup between the two racers.

O’Donovan earned his space in the final race after winning a tie-breaker with Greek eSailor Ioaniss Kokonias.

The championship match was a five-minute match race between O’Donovan and Cardona.

A summary of the final race on SailGP’s website said O’Donovan forced Cardona to commit a penalty, allowing the Brit to gain an early lead. The Spaniard closed the gap, however, making the race interesting until he hit a turning marker. The hit was another penalty for Cardona, allowing O’Donovan to cross the finish line in first place, wining the inaugural eSailGP Championship.

“It feels amazing to win. Even getting into the final was a major achievement as the competition is so high, but to then beat Joan in the final is really special. I have been practicing my match racing on the eF50 and I think that is what really paid off,” O’Donovan said in a released statement. “I can’t believe it and am especially excited to join Joan onboard the F50 in San Francisco next year. It’s pretty cool to have raced against him in eSailGP and then get the opportunity to sail with him. I can’t believe it.”

Dates and formatting for the 2021 eSailGP Championship will be announced later this year; also, to be announced are three invitational events.

The second season of SailGP is set to restart in San Francisco, April 2021.