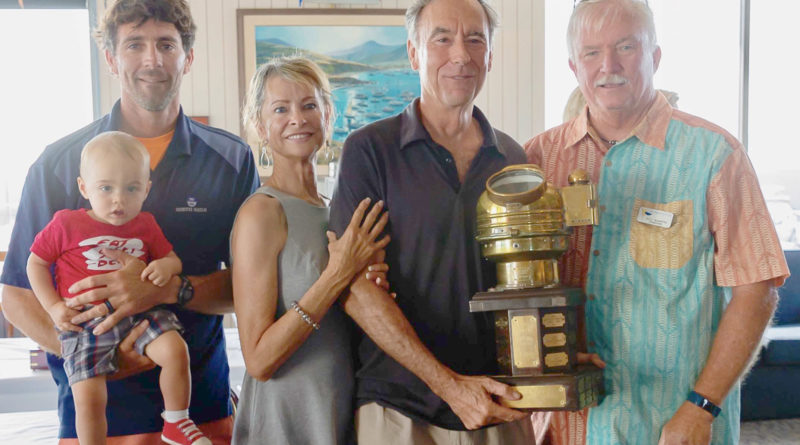 Also shining bright at the regatta, which was held July 27-28, was Mental Floss; the vessel was the first multihull to finish the offshore race from Santa Barbara to Redondo Beach.

Competitors from more than 30 different yacht clubs participated and were grouped into eleven fleets based on similar performance. Those fleets included a Cruising fleet and Multihull fleet. The fastest fleet included several beautiful yachts, with lengths between 60 and 70 feet.

The first boats to finish began arriving at around 11 pm, and the last boat finished just before noon on the next day.

The first boat to finish, with the lowest elapsed time, was the Andrews 63, Medicine Man, owned by Robert Lane of Long Beach Yacht Club.

The overall winner, with the lowest corrected time, was the Andrews 40, Fast Exit, skippered by John Raymont of Balboa Yacht Club.

The first multihull [ORCA] to finish was the Gunboat 62, Chim Chim, skippered by John Gallagher of Mission Bay Yacht Club.

The full results can be viewed at: http://jerryv.x10host.com/SBtoKH/2018/index.html.

The competitors were treated to multiple socials at the host clubs, such as a cocktail party and two barbecues at Santa Barbara YC, and the awards party and traditional Shrimp Feed at King Harbor YC.

Photos of the event can be viewed at: www.KHYC.org