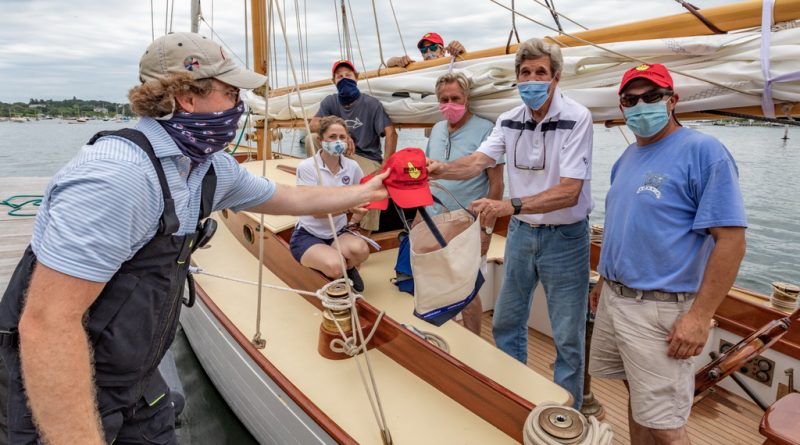 Edgartown, Massachusetts—Former U.S. Senator for Massachusetts and former U.S. Secretary of State John Kerry claimed the coveted Venona Trophy at Edgartown Race Weekend’s 82nd ‘Round-the-Island Race, sailing his classic Alden Cutter 44 Lark to win his class and post the best corrected time from among all entrants in the Spinnaker Division. A fleet of 46 boats competing in eight classes started and finished its circumnavigation of Martha’s Vineyard on Saturday, Aug. 1. In a virtual Awards Ceremony, held the next afternoon, Kerry praised host Edgartown Yacht Club for pulling off the regatta during the Coronavirus pandemic, which sadly has caused the cancellation of many other regattas.

“The Club did a brilliant job — thoughtful and well executed, without onerous but, nevertheless, clear restraints,” said Kerry, mentioning particularly the restriction of no social gatherings at the club. “That’s a hard thing to give up in sailing, but it was hugely appreciated that they covered all the bases and it allowed us to get out on the water.”

Kerry and his team of five were squeezed out at the start and had to circle back to restart behind the eight other boats in his class; however, over the course of 54.7 nautical miles, they were able to “work the current and the calm” to find little breaths of air that helped them make up for lost time.

“Some of it was luck being in the right place; there are all sorts of variables in sailboat racing, and they were all at play here,” said Kerry in a released statement.

The light northeast wind at the start became a stronger southwesterly by the time the fleet reached the south side of the island. Kerry said it was a pleasure to get going at a decent pace from there until the finish.  “We thought we might have a shot at the class victory, but we were totally surprised with being awarded the Venona Trophy,” he said, adding that Lark, built in 1932 and older than the race itself, was recently re-launched after some work, and this was her maiden race.

Stephen Besse (Vineyard Haven, Mass.), sailed his J/120 Apres to victory in the PHRF Doublehanded A Class, the second largest class with eight entrants, to collect the Eolis Trophy. He says he has been second in his class here at least five times out of ten previous tries but has never won, and this year was the first time he sailed without a full crew.

“I did it that way because of Covid-19,” he said, “knowing there would be only one other person to worry about instead of eight people.”  Besse, like Kerry, played it right at the most critical juncture in the race: “The wind dropped out where Muskeget was narrowing down and some boats got sucked across Wasque Shoal. Having done this race before, I stayed farther east and drifted by Mutton Shoal on the right side of the buoy by just a boat length. Others had gotten carried past it and were anchored. We had enough of a lead that if we didn’t do anything stupid, we’d be good. We sailed the rest of the race hard, however, and we loved sailing from The Hooter (a government mark that makes a hooting sound) to Squibnocket in seven knots of breeze.”

Edgartown Yacht Club’s ‘Round-the-Island Race — one of America’s oldest distance races — originated in 1938, and except for the years of World War II, has been an annual event since then on Martha’s Vineyard. The fleet sails between Martha’s Vineyard and Nantucket along the east beach of Chappaquiddick. At midday, it is in the open Atlantic Ocean with views of the south coast of the Vineyard.  In the afternoon, rounding the famously gorgeous cliffs of Gay Head, the fleet sails up Vineyard Sound. If the tidal currents or wind conditions make the going slow, the Race Committee can shorten course. (This year, Doublehand B and PHRF Non-Spinnaker classes sailed an abbreviated course of 45.52 miles.)