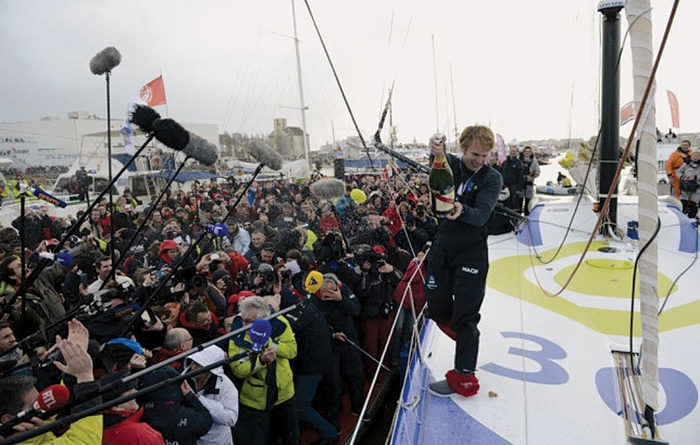 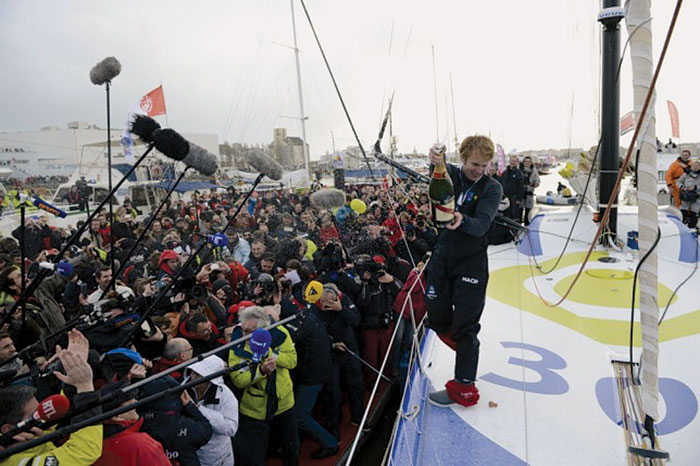 The 29-year-old Gabart was the youngest skipper competing in the seventh edition of the sailing event. He crossed the finish line in Les Sables d’Olonne in western France at lunchtime Jan. 27, in his yacht MACIF.

“At the start, I didn’t think I could win the race; I started to think I could in the Indian Ocean,” Gabart said. “I learned a lot about myself … I pushed my limits.”

Gabart finished the race in 78 days, 2 hours, 16 minutes and 40 seconds — smashing two-time winner Desjoyeaux’s course record of 84 days, 3 hours, 9 minutes and eight seconds in 2009. Desjoyeaux did not compete this year.

“The battle with Armel was settled in the Pacific. He really forced me to dig deep,” Gabart said. “The fact the race was so intense is also down to him.”

Thousands of people packed the port in western France to give Gabart a hero’s welcome as he returned. He looked visibly moved and struggled to hold back tears as he stood at the bow of his yacht, waving back to the crowd.

“Everyone tells you about the fervor the race generates, but you just don’t realize it when you’re at sea,” Gabart said. “I made a lot of errors (in the race), but it’s no big deal. Humans make mistakes. You just have to bounce back.”

“You’re never safe in this race: It never ends. It can all be over in a few seconds,” Gabart said. “That’s what makes the race so intense. I had that in my mind throughout the race. That’s why I am so emotional now.”