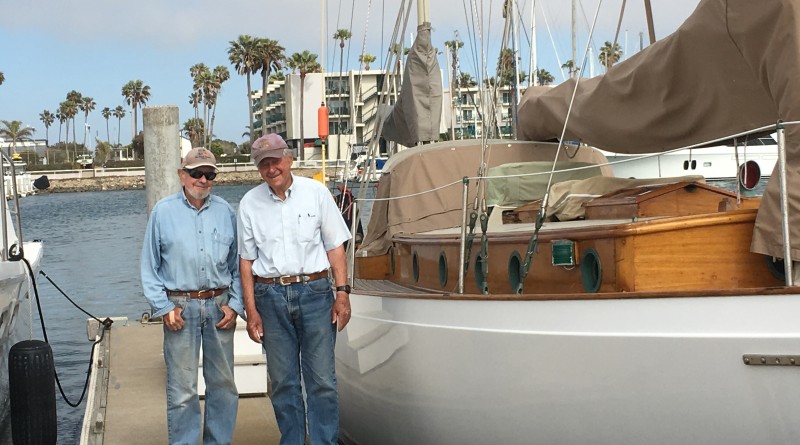 Walter Russakoff (left) and longtime sailing partner and friend, Dick McNish (right), have no plans to ease off their time at the helm when they celebrate their 90th birthdays in 2017. Catherine French photo

Longtime sailors plan to sail N2E, classic regattas when they turn 90 in 2017.

OXNARD — Richard (Dick) McNish and Walter Russakoff have been friends and competitors for 45 years. The 89-year-old sailors still race their boats against each other and teamed up on McNish’s Cheerio II in the annual Newport to Ensenada Race, where this year they took first in class.

“We met 45 years ago or so at Anacapa Isle Marina, (in Channel Islands Harbor), and we’re still friends on and off our boats,” said McNish. “He is a great helmsman. I usually start the Ensenada race and then Walter takes over. He knows where we’re going.”

To date, Russakoff has sailed each of the 38 McNish races on Vignette II, coming in second overall in the first year of the regatta with three first place wins since.

“I sail the Newport to Ensenada Race every year aboard Cheerio II with Dick and crew, and in the Yesteryear and One More Time classic regattas as well. I plan to race on my boat again in this year’s McNish,” he said.

Russakoff, a master craftsman who built his own sloop Vignette II, said his first experience “sailing” at the age of 9 was in the Los Angeles Pond, a swamp at City Terrace. The boat was a flat bottom and he had to pole it around the pond.

“When I was older, I became addicted to riding motorcycles, then a friend of mine had a girlfriend with a sailboat. She let me go along with them sailing, that was in 1952. I quickly realized that sailing was an opiate for me like motorcyles had been. It’s like a drug, when you are on a boat at sea, there is nothing else,” said Russakoff.

McNish’s first boating experience was at the age of 7 during the annual Semana Nautica event in Santa Barbara, “I entered the washtub regatta, in a real wash tub and paddled the race course and won! Not long after I started sailing and have been at it ever since.”

The duo has each owned several boats. But, for most of the last 36 years McNish has sailed and raced his 56-foot 1931 Fellows and Stewart yawl that was once owned by Errol Flynn. He purchased her in 1980 and is the sixth “owner.” As McNish describes it, “You never really own a classic, you take care of it until the next person takes it over.”

In 1972, Russakoff began building his sloop Vignette II, after his wife requested a larger boat. “I used a 1936 William Atkin design, with a lot of modifications. I built her in Encino at a union boatyard. To build her myself, I had to shorten her length to under 40 feet, anything longer required union help. I was in the union, but couldn’t afford union wages.”

It took seven years for Russakoff to complete his 39.8-foot sloop. He had owned a Cal 24 named Vignette before building Vignette II.

In 1976, McNish was competing in a race against modern lighter boats. He was so far behind the fleet he received a call from the race committee telling him to record his own time as they were heading back to the clubhouse.

He spoke to Pacific Corinthian Yacht Club Race Committee chair, Steve Smith about how he could compete in races against these newer boats. The answer was, “Why not start your own race?” So, he spoke to friend Jim Crandal from Anancapa Yacht Club who helped McNish design a race for classic wooden yachts.

Thirty-nine years later the McNish Classic is expecting 30 yachts to compete in this year’s race scheduled for July 30. Even famed Americas Cup yachtsman Dennis Connor has competed in recent years. “When Dennis started coming up, we felt we made the big time,” quipped McNish.

What keeps these two sailors going? “I like it because you are on your own out there; we race but we don’t go that fast so it is relaxing,” McNish explained.

“It is an opiate for me, I forget about problems and everything else but sailing the boat, the rest just falls away,” said Russakoff.

McNish and Russakoff, plan to race in the 40th McNish Classic in 2017 as well as the Newport to Ensenada Race when they will both be 90.

“I am going to keep going as long as I can, “ said McNish. Russakoff feels the same, “Why not?” he said.