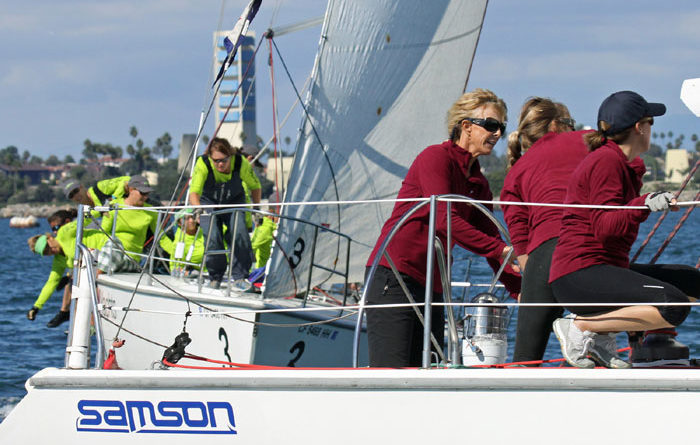 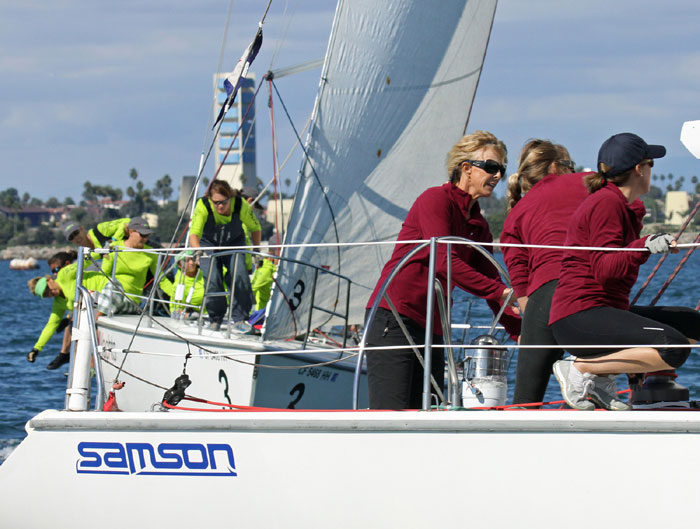 In the closely fought final race of the regatta, Gardner and Southwestern Yacht Club’s Colleen Cooke — looking to get a “three-peat” adding to her 2010 and 2011 victories — were no more than a boat-length apart. If Cooke crossed the line first, she would win the regatta — and if Gardner crossed first, she would win on a tiebreaker.

“We knew it would come down to getting and staying in front of them,” Gardner said, “and we knew what we needed to do to win.”

With a brief fall storm moving through Southern California over the race weekend, Sunday dawned with rain turning to cool overcast skies and a breeze of about 4 to 7 knots that couldn’t make up its mind which way it wanted to blow.

“This weekend was so hard,” Gardner said. “We would go right, and the wind would go left. It felt like a crap shoot trying to guess the wind direction.

“October winds get goofy,” she added. “We struggled in the first race (with a seventh-place finish); but in the last race, we had steady breeze and clawed our way back.”

“Last week, we put the crew together,” Gardner said. “The front, middle and cockpit positions were really good. We just had to worry about the trim.

“They’re a great team — and hard-working,” she added. “Jessica is three months’ pregnant, but worked just as hard as everyone else.”

At the end of the day Saturday, Cooke’s Southwestern YC team was in fourth place, six points behind leader Gardner. A third win wasn’t out of reach, but they had their work cut out for them.

At a little after 9 a.m. Sunday, when some of the other teams were only just arriving at their boats to get them rigged and ready for the day, Team Southwestern YC was motoring out of the Alamitos channel to begin their morning practice.

“We felt a lot of pressure to do a three-peat,” Cooke said, “and we felt like we had a target on our back.

“Last night, sitting in fourth place, we knew the top three teams were San Diego, Newport Harbor and ourselves,” she said. “Today, my team fought and fought, and kept fighting. We were only a sliver away … but we had a bad takedown in the last race, and that’s all it takes.

“My team and their crew work was the greatest,” she said. “That is why we were able to do as well as we did today.”

California Yacht Club’s Denise George was the manager for Team Cal YC, which took third place in the regatta after a second-place spot at the end of the first day.

Team member Kelly Fennessy talked about the makeup of the team.

“We have veteran sailors on our team, mixed with younger members new to the team,” Fennessy said. “It’s about a 50/50 split.

“We have two 15-year-olds and three 16-year-olds who all work in key positions,” she said. “The older members didn’t jump in to help, but let them handle their jobs on their own.”

“It’s always a pleasure to sail with these girls,” Blecher said. “They’re great sailors and have experience on these boats.

“We showed Saturday that boat handling can make or break a race,” Blecher said. “And the younger members worked hard to learn the boat. It was harder on them because they also have homework to do each night.”

She also received a $1,000 scholarship check from the Linda Elias Sailing Scholarship.

New this year was a special donation of $500 to the second place finisher, Colleen Cooke, from the late Linda Elias’ surviving husband, Michael Elias.

The Women’s One-Design event began 20 years ago and Linda Elias — the namesake for the current regatta — won the championship three of the first five years. Elias died in 2003, and the Long Beach/Los Angeles Women’s Sailing Association rededicated the event in her memory.