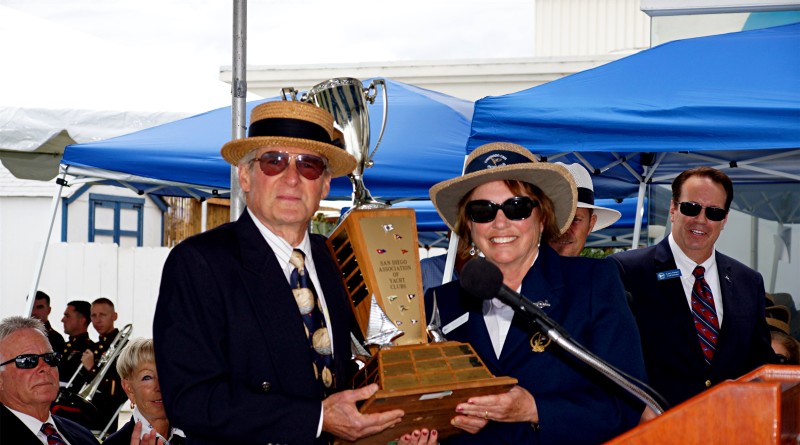 SAN DIEGO — Garry Adalian was presented the San Diego Association of Yacht Club’s (SDAYC) Yachtsman of the Year trophy during the Coronado Cays Yacht Club’s Opening Day in May.

SDAYC Commodore Eric Smitherman presented Adalian with the award during a special ceremony. Most of the recipients of the prestigious award have been racing sailors.

When asked how he felt about winning the award, he said, “Quite an unexpected honor. SDAYC’s Yachtsman of the Year goes mostly to sailors. Since Alonso de Jessop won the first Yachtsman of the Year in 1959, only five have gone to a powerboater. Dennis Connor is on the trophy six times, along with Lowell North and Jerry Driscoll. That’s pretty humbling company.”

Coronado Cays YC Commodore Dianne Durgin submitted Adalian’s name for consideration last year. In her letter, she spoke highly of his achievements both on and off the water. “Garry’s outstanding accomplishments over a sustained period of time spanning 13 years as one of the nation’s premier yachtsman in the sport of predicted log racing has been remarkable,” she wrote. “His performance is matched by his overall strong contribution to the sport of yachting as both a member of the Coronado Cays YC and a bridge officer on the San Diego Cruiser Association (SDCA).”

The retired pilot has successfully contributed to the sport by promoting yachting through social and educational programs, according to the nomination letter.

Adalian has competed in Predicted Navigation contests for 18 years in his Grand Banks 32. He has won the San Diego championship 10 of the last 12 years. He has also won many of the North American Cruiser Association‘s top trophies as well as NACA’s North American Invitational Noon Day Canon trophy in 2009 in Seattle and again, back to back in 2014 in San Diego and 2015 in Ventura.

Adalian was hooked on boating after sailing on a friend’s 31-foot Cheoy Lee in San Francisco Bay in the late ’60s. He purchased a 40-foot Cheoy Lee offshore yawl in 1972 and raced the yacht in the Newport to Ensenada International Yacht Race from 1973-1979, taking third in class in 1974. After selling the yacht he spent 8 years building a Lyle Hess English cutter, which he sailed in the Coronado Cays YC beer can races. By 1994 he had sold the cutter and purchased a Grand Banks 32. He raced that boat in SDCA’s monthly Predicted Log races.

“After 20 years of hauling sails, I decided I just wanted to start the engine and drive to Catalina at 8 knots,” Adalian told The Log. “A Grand Banks trawler is a natural progression for a sailor to powerboats.”

In 2002 and 2004 he won SDCA’s Sun Harbor Trophy that qualified him to compete in the NACA North American Invitational. The race is considered as one of the toughest races to win, according to the nomination letter.

When he is not on the water, the retired pilot can most likely be found in the sky going upside down in his acrobatic open cockpit bi-plane.

8 thoughts on “Garry Adalian named SDAYC Yachtsman of the Year”