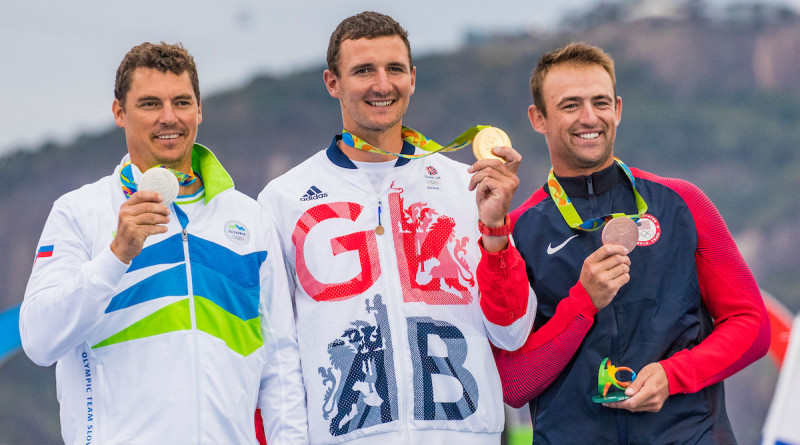 SAN DIEGO — Medaling in the Olympics has been a long time coming for San Diego native, Caleb Paine, who recently accomplished a goal that was set in motion six years ago.

In August, he competed in the Rio 2016 Olympics, which consisted of 380 athletes from 66 nations, in 274 boats racing across 10 Olympic disciplines, according to U.S. Sailing.

Paine, 25, walked away with Bronze in the Finn class.

Paine’s entry into sailing began at the age of 6 when his father, Doug Paine, introduced Caleb and his brother to the sport in Mission Bay. Caleb took to the sport and began racing competitively, eventually making the decision to dedicate his life to sailing with a dream of medaling in the Olympics. At the age of 19, Caleb who is a member of Mission Bay, Southwestern and St. Francis yacht clubs, began training for the Olympics.

The sailor took some time talking to The Log about his experience in Rio and what comes next for the Olympian.

How did it feel standing on that podium with your medal?

It’s something I’m still trying to place and think about. The Olympics are amazing on so many levels; it’s so complex just the fact that you have over 200 countries coming to compete peacefully in unity and that is something you can feel at the opening ceremonies and then you have the event itself and being a part of Team USA which is really special.

How do you mentally prepare for a race?

I just get into the mindset that the only thing I can control is myself. The moment I step on the boat the only thing I am thinking about is sailing and all the rest of it, no matter how big or small the problems are, is out the window until I am off the water. And it’s taken me a long time to get to that point and it’s still something I’m improving and working on now but that is the biggest thing: being able to fully focus.

Sailing there was as good as it could have been. We had a variety of conditions and we didn’t miss any races and the most well-rounded sailors did well there and it was pretty spectacular.

Medaling is a huge accomplishment. Are you satisfied with Bronze?

I feel really good about it. I had a tough event the entire time but I kept hammering away and doing all I can to medal and obviously if I hadn’t made some mistakes here and there I would have had a better medal but a medal none the less is amazing and something I am super happy about. The competition is quite high and to come away with some hardware is definitely special.

Was there ever a time you wanted to walk away from sailing?

So many times. A couple of times in the campaign I would miss out on funding by two points or something ridiculous and it does get hard. I am fortunate and this was an opportunity of a lifetime but it gets hard because it’s something that you dedicate your life to every moment of every day is for that and when you don’t achieve it, which I did many, many, many times it destroys you; it guts you.

When you have a goal that’s four years down the line it’s easy to get sidetracked and say why does it matter? But it truly does matter or you will lose out on the next event you’re going to go to or won’t be as strong here or there so it really is a full-time job.

How do you move past defeat?

In sailing you can be the fittest athlete out there, you could have put more time on the water and still not do well on the water. You could get a few guys who got a couple lucky shifts and they beat you and that’s sailboat racing. You have to be mentally capable to deal with that and it’s what truly makes it unique and unlike any other sport. It takes a strong willed mindset in order to succeed in this sport.

People have dreams and only a few reach them. How did you make yours a reality?

I just always believed I was going to do it. My goal was not just to go to the Olympics to get the participation medal it was to win a medal that’s the only thing I had on my mind. And it could have easily gone the other way if I hadn’t won the Olympic Trials I could have been sitting at home watching it. I think it’s almost blind faith. I believed in myself.

I do plan to go back to college at some time and when I do it will be at Cal Maritime Academy. There is a rumor that the Finn may not be in the next Olympics and there is not another boat available for heavyweight sailors so that makes it difficult for me but if there was I would sail again for sure.

Learn more about Caleb at ussailing.org/olympics/teams/usst/caleb-paine-finn/.