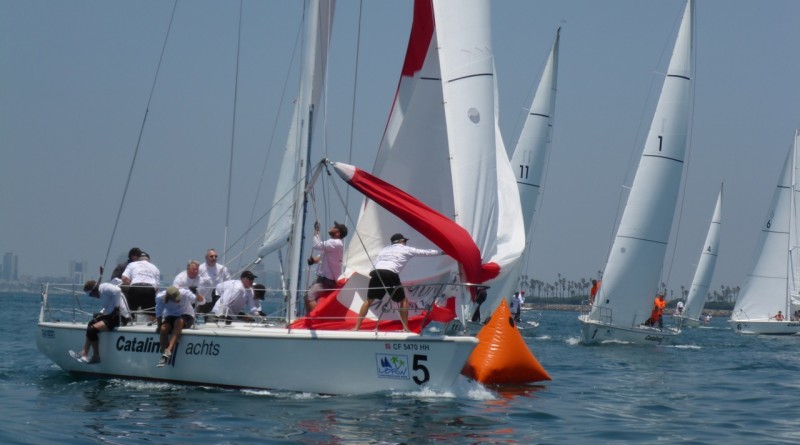 LONG BEACH — Competitors greeted the final day of Ullman Sails Long Beach Race Week (LBRW) on June 26 with tight racing in 14 classes on three windward-leeward and random leg courses. This after an eventful afternoon the day before when several great white sharks were sighted off the peninsula prompting a Marine Safety Advisory.

The 4- to 7-foot juvenile sharks did nothing to dissuade the sailors from retuning to the bay for a final day of racing.

Long Beach Yacht Club unseated LBRW co-host Alamitos Bay Yacht Club in the Yacht Club Challenge. The trophy is awarded based on the cumulative score of a team of three boats, competing in different classes – one of which must be a Catalina 37. Long Beach YC edged out Alamitos Bay YC by a slim .02 points thanks to a strong performance by Bruce Cooper and his J/70 crew, Medicine Man, and Dave Hood, who clinched his fourth Catalina 37 National Championship title today, in a dog-eat-dog battle with Chuck Clay’s Alamitos Bay YC team.

One sailor on Code Blue went for an inadvertent dip at the windward mark. Skipper Robert Marcus and his Code Blue crew were able to retrieve the man and regain some lost ground, to capture the Schock 35 National Championship title.

While racing was extremely close in most divisions, including PHRF A where Picosa beat Mexican Divorce by just 1 point, with E-Ticket 2 points behind.

In other categories the dominance was indisputable. Venom put the squeeze on the 16-boat Viper 640 fleet, while Relapse controlled the Flying Tigers with six bullets and one second place finish. Victor Wild’s Fox outwitted five rivals in the Fast 50s division, and Valkyrie slayed the Sportboat fleet.

Some of the most rousing competition took place in the Catalina 37 fleet, where David Hood and his Long Beach YC team struggled to defend their National Championship title.

“It was a chess match, and not your normal Long Beach conditions,” added Long Beach YC tactician Randy Smith. The impact of the marine layer saw the left hand of the course favored more than usual, resulting in “a tricky weekend” compounded by a “minefield of kelp.”

Meanwhile, Alamitos Bay YC had enjoyed a great start in the day’s first race and a promising finish. But the final race was “really intense,” said co-skipper Chuck Clay. “It was a full-on tacking duel.”

At one point Long Beach YC and Alamitos Bay YC were in seventh and eighth places in the nine-boat fleet, nearly sacrificing their podium places to a second Long Beach YC team skippered by John Shadden.

But Hood had a better set at the top mark and “stretched it out,” Clay admitted. “It was a super tight regatta, but a lot of fun.”

Ullman Sails LBRW is hosted by Long Beach YC and Alamitos Bay YC. Next year’s event will be held June 23-25, 2017.