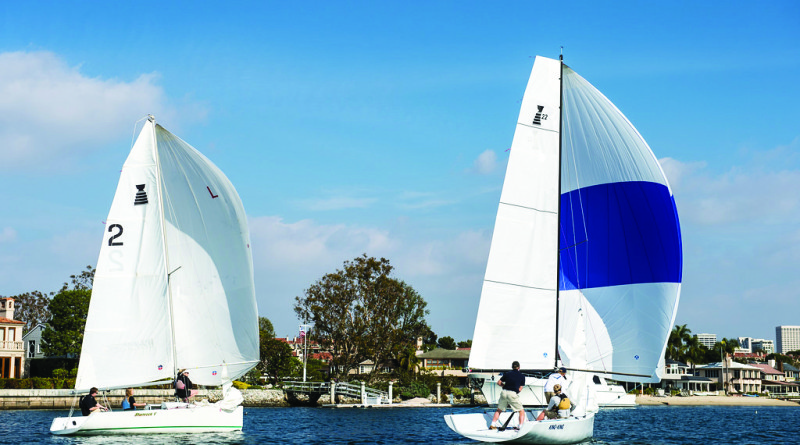 NEWPORT BEACH — The first of 12 new Governor’ s Cup 22 sloops was christened and sailed for the first time in the waters of Newport Beach on Jan. 16. Construction of the fleet is expected to be complete by June 2016 and will be used for the first time in the 50th anniversary Governor’s Cup International Youth Match Racing Championship, which will be held at Balboa Yacht Club from July 15-23.

The launch of the new boat is the first event of this year’s 50th anniversary celebrations for the Governor’s Cup, which will complement the regatta itself.

Balboa YC member and former commodore Alan Andrews, an internationally recognized yacht designer, designed the new boats. Andrews also designed the current fleet of Governor’s Cup 21’s but, given advances in design techniques and materials, the new 22’s are expected to be significantly faster than the current boats (which still remain one of the best boats in the world for this type of sailing).

The Newport Balboa Sailing & Seamanship Association (NBSSA) owns the current fleet and will own the fleet of 22’s. The funds for the construction were donated to NBSSA, primarily, by members of Balboa YC; additional funding provided by Governor’s Cup alumni and friends of youth sailing from as far away as Florida and New York. Contributions also included a donation from the Cruising Yacht Club of Australia, a perennial competitor in the Governor’s Cup over the years — and home club of the 2015 champion — in recognition of the importance of the Cup internationally.

This year’s event is co-chaired by Paul Blank and Tom Purcel, son of the founders of the Cup, Chet and Glee Purcell, and crewed on the winning team in the first three Governor’s Cups.

“This was an all-American effort with the boats built locally by Westerly Marine of Santa Ana, Calif., one of the finest custom boat builders in the United States with other U.S. companies providing sails, rigs, running and standing rigging and other components at substantial discounts,” said Andy Rose, Balboa YC member, two-time Governor’s Cup winner and America’s Cup tactician who led the fundraising efforts for both fleets of Governor’s Cup boats.

The Governor’s Cup is the oldest youth match racing event in the world and was founded in 1967 with a trophy donated by then-California Governor Ronald Reagan. Governor’s Cup alumni include some of the finest sailors in the world including James Spithill, two-time winning skipper of the America’s Cup, and round the world race winners including nine sailors named U.S. Rolex Yachtsman of the Year and three members of the United States National Sailing Hall of Fame.