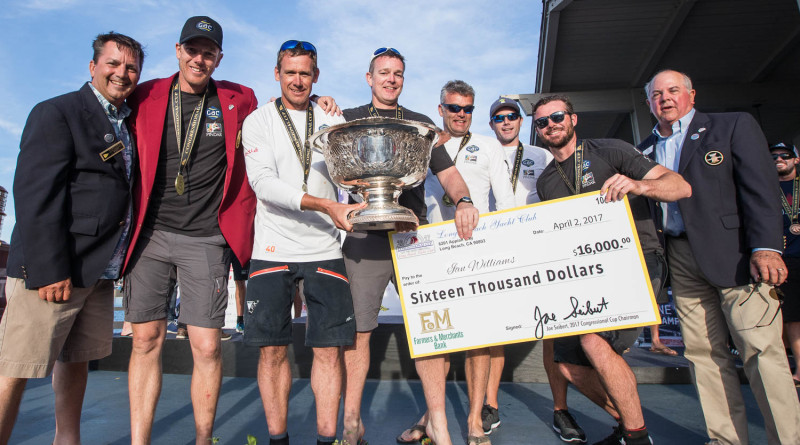 Sailor dons Crimson Blazer after his team comes from behind to win regatta in Long Beach.

LONG BEACH — In a series of matches which were as mercurial as the weather, Ian Williams (GBR) and his team GAC Pindar triumphed in the 53rd Congressional Cup, beating Johnie Berntsson (SWE) in a fifth and final winner-take-all match that concluded April 2.

Not since 2012 has Ian Williams [GRB] donned the coveted Crimson Blazer, the honor bestowed to the top names in sailing since 1965. What The Masters Green Jacket is to pro golfing, the Crimson Blazer is to yacht racing.

He returned to the 2017 Congressional Cup looking for redemption, building momentum throughout the five-day event. In the quarter finals he conquered New Zealand’s Chris Steele, moving on to beat defending champion Taylor Canfield in the semifinals in three strokes. The victories set up a final matchup with Sweden’s Johnie Berntsson.

Races were aggressive with two matches taking place as a thick bank of fog rolled through.

“It’s rare to race like that; difficult when you can’t see the top mark,” Williams said.

His team, however, was able to keep close to Berntsson, and get a win in the second match.

“Johnie has been on fire this week, and we thought once we got a win on him, maybe we could break his spell,” Williams said.

In the fourth flight, that fire turned explosive. Williams was penalized, as the boats skimmed the pier during the pre-start, for nosing in without room. Flagged, he continued his combat with Berntsson, sprinting toward the start line, but didn’t keep clear of Berntsson, picking up a second penalty. Then as he tacked back to clear the committee boat, he was forced to fend off, warranting a third and terminal (black) flag. The race was over nearly as soon as it had begun.

“We were expecting it,” Williams admitted, but they shook it off. “We just had to forget about it and move on to the next race.”

With wheels spinning, racing resumed in a final winner-takes-all match. Splitting tacks at the leeward gate, Williams went left while Berntsson banked on the right side of the course … and lost. With the late afternoon wind waning, Williams got the better breeze and defeated Berntsson by over a minute.

Going into the day, both Berntsson and Williams were within one point of the Finals.

Next year’s Congressional Cup is scheduled for April 3-8. Visit thecongressionalcup.com for more information and full results.

Harry Price – Down Under Racing, Australia