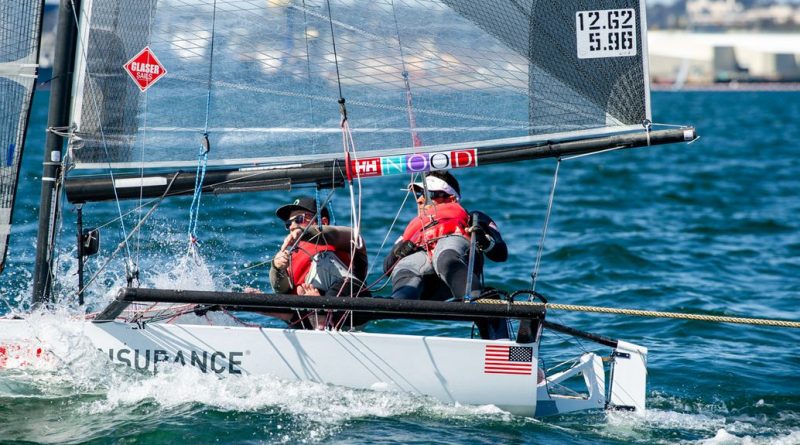 Sailing World magazine is the organizing authority for the regatta and San Diego Yacht Club and Coronado Yacht Club are the Host Clubs.

SAN DIEGO—Registration has opened for the Helly Hansen National Offshore One Design (NOOD) Regatta in San Diego, March 19 through the 21.

The regatta is an official US Sailing sanctioned event organized by Sailing World and hosted by San Diego and Coronado Yacht Clubs.

The regatta is open to any boat that is either an active member of a recognized class association, or a boat that meets the criteria established for this regatta by the class coordinator for entry in a level class. The first warning signal is scheduled for 12:30 p.m. on Friday, March 19, and 11:30 a.m. on Saturday and Sunday, March 20 and 21. Each boat’s series score will be the sum of scores for all races, no score will be excluded. One race will constitute a series. Prizes will be awarded by class and each class winner is eligible for the 2021 Helly Hansen Caribbean NOOD Championship.

Registration can be completed at online at yachtscoring.com/notice_board_summary.cfm?eid=13225. Late entries will be subject to a late fee of $50 if received on or after March 8.

Event organizers emphasized COVID protocols and the San Diego Health Order Guidelines will be followed. According to the notice of race (NOR), all boats are required to abide by the state and local laws, guidelines and recommendations as well as the host club’s restrictions with regard to the COVID-19 virus. The NOR also stated due to the uncertainty of these times with health regulations, there may be some changes to the NOR and the schedule as to locations and procedures. Links to these documents will be posted on the Official Notice Board located at yachtscoring.com/notice_board_summary.cfm?eid=13225 as they become available.

The Helly Hansen NOOD Regatta in San Diego will be the first in the NOOD series, followed by events in Florida, Maryland, Chicago, Massachusetts, and the championship held in the Caribbean.

The NOOD series was founded in Newport, Rhode Island, by the editors of Sailing World in 1988 to help foster the growing interest in racing one design keelboats. Celebrating their 30th anniversary in 2018, the NOODs have five national events each year and one international championship.