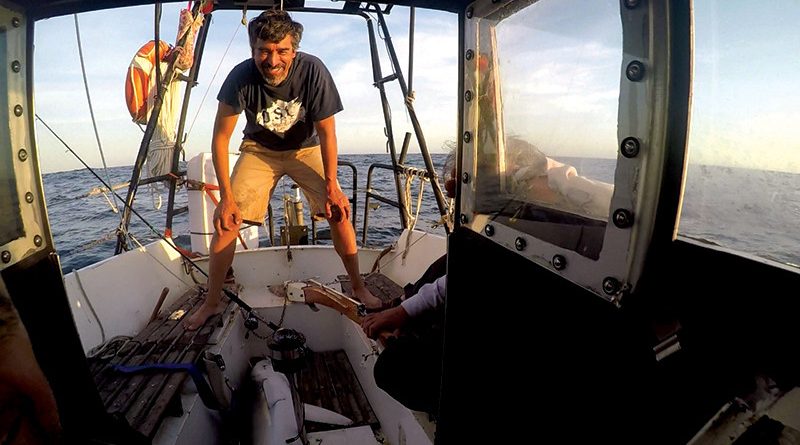 The Pequod, a 28-foot sailboat, was originally skippered by Hernán Álvarez Forn who became the first Argentinian to sail from Argentina to Antarctica in 1987.

BUENOS AIRES, Argentina一It is a three-month and 4,000-mile journey by sailboat between Buenos Aries, Argentina, and Deception Island in the Antarctic. The journey covers miles of sea including, a journey across Drake’s Passage with 10 to 15-foot swells and strong northwestern winds.

The Pequod, a 28-foot sailboat, made the journey for the first time in 1987 with skipper and well-known Argentinian skipper Hernán Álvarez Forn and made it again in 2021 with new skipper Manuel Pardi.

Pardi and his crew of two left their homeport of Buenos Aires on the first day of 2021 and returned three months later after completing the harrowing journey to the volcanic island just off the Antarctic Peninsula.

“When we arrived at Deception Island, it was an incredible moment it was a big euphoric time for me and for the Pequod because of the journey there was plenty of obstacles and things broken and it was very hard for us to get there,” said Manuel Pardi, skipper of the Pequod. “…When we arrived it was like we did it… it was amazing and unforgettable for all of us.”

The island is an active volcano in the South Shetland Islands shaped like a horse-shoe and covered in barren volcanic slopes, steaming beaches, and ash-layered glaciers. The island is open to the sea through a narrow channel at Neptune’s Bellows and forms a naturally sheltered harbor, according to the Deception Island Antarctic Specially Managed Area website.

Pardi’s journey didn’t begin the day he left on the Pequod, he was an avid sailor in his youth and loved to be out on the water in a boat, but life took a turn for the busier and his dream of sailing on a large adventure was put on hold.

“I am almost 50-years-old and when I was young I used to sail a lot in my youth,” said Pardi. “Then I became a lawyer and I have a family and my kids and I didn’t sail for a lot of time for more than 25 years since… and I always wanted to sail… a long trip.”

Three years ago Pardi began the journey of a lifetime simply by picking up a book. Forn wrote about his journey to the Antarctic in “Antarktikos” and Pardi was reading the book when he came across an ad for the Pequod, the boat in the book.

“I got a sail ad on the internet and the Pequod, which was his boat was for sale,” said Pardi. “Completely rusted and with openings in the hull and things to restore and well that happened to me that I was reading a book and I go to the ad for the boat of the book and you know… well then I bought the Pequod and I decided to it was going to be my boat to do the adventure that I was reading about and that was my project.”

Pardi bought the boat, met Forn, and began repairing and restoring the boat to its original condition.

During the repairs,  Pardi made another unique decision that would set him apart from the original journey, he would make the trip with zero-carbon emissions.

“I said I want to go to Antarctica with zero-carbon emissions… I will go to a place that it is unpolluted and pristine and I want to go electrical,” said Pardi.

Pardi removed the old diesel engine which was leaking oil and equipped the boat with a Torqeedo all-electric auxiliary propulsion system, which could be recharged using wind and solar energy.

Unfortunately, Hernán Álvarez Forn passed away in November of 2020 at the age of 94 just months before Pardi was set to make the journey.

Forn’s family asked Pardi to let Forn make the journey to Antarctica one more time so Pardi could scatter his ashes.

“The family asked me to take the ashes to Antarctica it was like honor or well something that I could accomplish and make and it was something remarkable to tell,” said Pardi.

Pardi’s journey is being turned into a documentary by Fede Peretti, for more information see http://pequod.com.ar/#antartida.