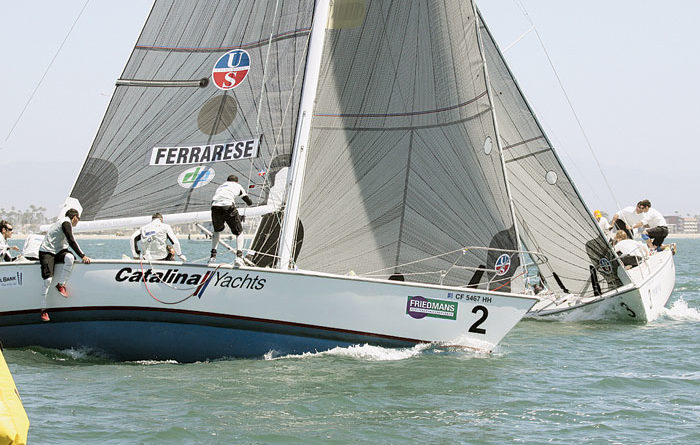 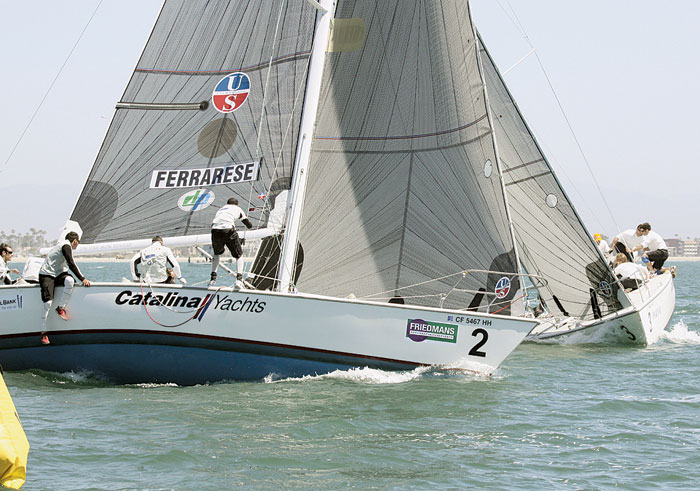 LONG BEACH — Simone Ferrarese found speed in light wind like nobody else could, to win Long Beach Yacht Club’s 49th Congressional Cup April 13 with a 54-second win over Ed Baird in a one-race championship showdown.

Did he enjoy it?

“It was the best win of my life,” Ferrarese said. “Taking the Crimson Blazer here has been my dream.”

The 25-year-old Italian was the only one of the semifinalists who hadn’t worn the blazer, as he moved into the company of the world’s elite match racing sailors with his first win in a Grade 1 event.

Earlier in the long afternoon, fickle and feeble breezes delayed the start of racing for about two hours. Then, they stopped racing again for an hour in midafternoon, before a 6-knot southerly showed up under a heavy cloud cover allowed the title match to go at 5:15 p.m.

Even then, the conditions were fragile — and this was after winds in the high 20s had prevented any pre-event practice only five days earlier. So, principal race officer Randy Smith cut the title and petite finals from best-of-threes to single matches.

After Ferrarese had spotted Great Britain’s Ian?Williams — the double defending champ and world No. 1 — their first semifinal match before winning the next two; and Baird had dispatched France’s Mathieu Richard with wins in their first and third go-rounds, it all came down to a single race.

That’s when Smith also ordered the windward-leeward twice-around course shortened from 0.35 nautical mile to 0.25 — a mere quarter-mile that seemed to suffice.

As it was, Ferrarese found breeze that nobody else could — first winning the favored left side from Baird, who went right at the start; and extending his leads from 29 seconds at the first windward mark to 35 at the leeward, 48 at the second windward and finally 54 at the finish.

Baird said, “He just went the better way. We gave him what he wanted.”

It was a mixed outcome for the 54-year-old Floridian, who had been away from the game for so long that he doesn’t even have an ISAF world ranking (Ferrarese is 15th and climbing).

Baird, asked earlier when he had driven his last match race, said, “My last monohull match race was July 3, 2007, at Valencia (Spain).”

That was the day Baird drove the Swiss team Alinghi to victory in the America’s Cup, leading to his selection as ISAF’s world yachtsman of the year.

Tactician Terry Hutchinson — who won this event as a skipper himself in 1992, 12 years before Baird’s win here — said he was trying to look on the good side of coming so close, “but we still want to win.”

Hutchinson, in fact, was invited to be a skipper in this event, but passed the privilege over to Baird, for whom he’ll be calling tactics in the TP52 Quantum Racing series in Europe this year.

As for Williams — who dominated the double round-robin series with 16 wins in two races — he could only say, “Simone did a nice job today. He got the speed off the line best. But we enjoyed the week.”

Competition was off Belmont Veterans Memorial Pier on the Long Beach outer harbor. The action may be seen indefinitely on t2p.tv daily video highlights.

Long Beach YC set the bar for world-class match racing in 1965 when it started the event. Back then, Rear Commodore Bill Dalessi persuaded Congressman Craig Hosmer and U.S. Sen. Tom Kuchel to sponsor official legislation endorsing the race as “the Congressional Cup.”

Some 20 years later, weary of late night protest hearings back at the club, then-Long Beach YC Commodore Pete Ives, with input from influential sailing leaders, introduced on-water umpiring that revolutionized the game worldwide for competitors and spectators — as far up as the America’s Cup.

The Congressional Cup has maintained a high level of organization with a unique volunteer force of some 300 club members and their families. Each crew is assigned boat hosts and a housing team to deliver outstanding local hospitality, for which the event has become well known.